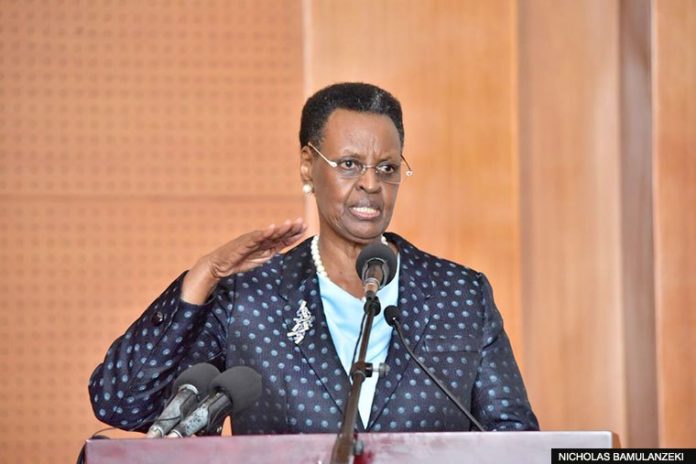 Five hundred ninety-nine thousand five hundred ninety-three hundred
candidates who sat for the 2018 Primary Leaving Examination (PLE) passed while fifty-six thousand one hundred and five failed and have been advised to repeat.
While releasing the results, the Minister for Education and Sports Janet Kataha Museveni said teachers must advance the methods of teaching to ensure that learners are able to apply knowledge they get from school in their daily activities.
“Teachers must therefore refocus the methods of teaching to ensure that learners are able to apply knowledge to their real life surrounding. These are the skills our children’s need in the 21 century; skills are not just about technical education alone even at primary level a child must come up with skills in learning.”
Ministry of Education and Sports together with the Uganda National
Examination Board released the PLE result for the 2018 on Thursday at the office of the Prime Minister indicating an increase in number of candidates who sat as compared to 2017. 646190 sat in 2017 while 671923 sat PLE in 2018 from thirteen thousand seventy-two centres which is 3.9% compared to 2017.
476,131 (71%) from public schools while 195,792 (29%) from private schools.
This was attributed to the district leaders who considered the Education
Minister’s call not to subject learners to pre-registration tests.

However, the Education Minister argued parent to follow up their children while at school especially the quality and standard of the school to avoid unnecessary missing of exams by pupils.
“I encourage parents to always ensure that they check the status of the schools to which they enrol their children’s or even whether their children are actually being registered or not before closure of the registration process by UNEB in order to avoid this problem.”
The PLE result indicated more girls which is 346963 (51.6%) than boys who were 324963 (48.3%) in 2018 sitting. Although the number of females exceeded those of males, male candidates performed better with 41604 which is 13% passing in division one and 42% boys passing in division two while 35,529 which is 10.5% of the girls passed in division one and 40.6% in division two.

According to UNEB candidates improved in English language, Social Studies and Integrated Science. In Mathematics improvement was registered at distinction level but declined at credit and pass level.
UNEB examiners reported improvement in candidates handwriting, self-expression and were more comfortable with direct questions.
The pass levels and the credit 6 and pass 8 for mathematics have declined and the overall performance in mathematics except at the distinction level decreased well as in 2017 83.6% of the candidates were able to pass with at least a pass 8 this time round that figure dropped to 77.0%.
Although the examination was conducted smoothly, some cases of
malpractices were registered with mainly free external assistance to

candidates. UNEB has therefore withheld result of over 3500 candidates still under investigations according to Mary Okwako UNEB chairperson.
“Although the examinations were conducted smoothly, cases of malpractices were reported. These were mainly cases of external assistance given to candidates by third parties inside examination rooms.”
In addition, she said that UNEB security operatives found teacher’s in five schools in Bundibugyo district assisting candidates by writing answers on the chalk board for them to copy.
“The schools are reported to have collected shs.50.000 from each candidate to facilitate this malpractice.”
She stressed further and said that these cases are to be tried in courts of law before taking up the next step.
The first lady also promised to pursue all reported cases of these teachers who participated in examination fraud and those found to have committed it before facing administrative sanctions.
Meanwhile, the S.1 selection exercise is set to take place on the 25th & 26th of this month.