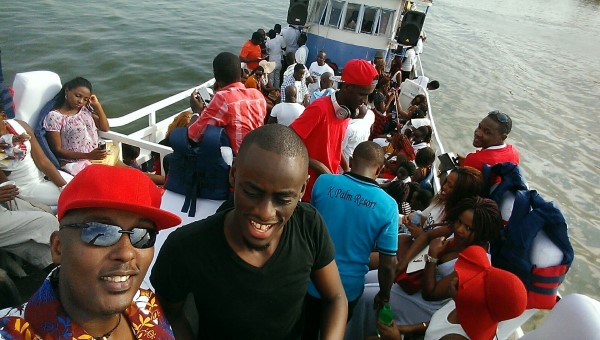 Behind the Scenes Of the Boat Cruise Tragedy: According to police in-depth investigation into the root of the matter it reports that, the boat had been grounded for over 6 months and repaired few hours before it started the journey. And most people around KK Beach say that the boat is in a very poor mechanical condition but the owner insisted on using it.

The police also say that the Marine patrol tried to stop this boat from accessing the waters but since it had very many rich and prominent people in the country, they over powered the police and took the boat on to the waters.

“And we have also got information that the boat had broken down and so it was out of operation and it is was pulled out where it was packed the day before the tragedy on and never tested it. They did in some welding because it could take in water I understand”, Police said

More investigations show that the boat was overloaded, most people on the boat were already drunk, there was loud music and the passengers couldn’t here the instructions of the captain as they were busy dancing and taking selfies.

Meanwhile, survivors say that the boat cruise was supposed to take place on 10th/11/ 2018 but it was postponed to November 24th arguing that the boat required to be fixed due to its poor mechanical condition.

“The boat was on repair for 3 days and I think they didn’t finish up the repairs well, it had some holes down which they didn’t see because they never tested it after repair” these holes allowed water in. One of the survivors narrating.

The boat was supposed to set off at midday from KK Beach Ggaba to K Pam beach Mukono but they left at about 6:30pm after the boat was repaired.

And after some minutes on the journey, the boat developed some complications and the captain tried to land at the nearest landing site which was Mutima beach in Mukono and just before docking heavy winds yelled up and from there the boat started to sink. They ran to one side of the boat tried to balance it but it was too late.

Some of the survivors Shamira Nsereko, Ssenkenzi Francis and Edward Katerega while at city mortuary say the boat engine kept cutting off again and again before it actually failed.

According to shamira Nsereko “ it started losing balance and of course we thought it was normal because the guy had told us earlier that we got to balance the boat but he was talking to people who were already drunk and some so drunk and they could not figure out that they had to balance the boat”.

“The boat engine was on and off and the boat had a hole as well, we reached a time and we stopped. The boat couldn’t move and they had to repair the engine and after we started moving again”. Edward katerega also a survivor said.

“Suddenly we saw one of the speakers started to fall out and when things started to get really bad we tried to create some balance whereby it couldn’t held because it was too late. All of us went one side and the other side had capsized”, Nsereko speaking.

Some people were unable to swim and women died mostly because they fear a lot according to Katerega.

Nsereko said they designed a pattern of forming a chain holding onto each other and the rescuers collected them from there. And also Katerega said he dived and then later came back and got hold onto the boat where the rescuers got him from. This is how some of them survived.

Similarly, the first rescue mission failed because the boat which came to rescue them was over loaded as everyone was jumping on to it and it also sunk together with its captain.

Agrey Bagiire the minister works and transport says, the “laws governing water transport have been out lived, so as a ministry we have started a new law and amending the law is ready for cabinet to discuss and that law will come with the new regulations on water transport.

Lake Victoria has had various water accidents and some of these include:

In May 1996, 800 people died when a boat MV Bukoba sunk in mwanza near Tanzania.

September march 2012 out of 60 people only 2 survived when a passenger boat capsized in Buikwe.

December 2016 a boat capsized in between kalangala and Entebbe leaving 20 people dead.

And finally 288 people died in September 2018 north of the main land in mwanza Tanzania boat accident.

And this is the most tragic one death toll yet to be computed.