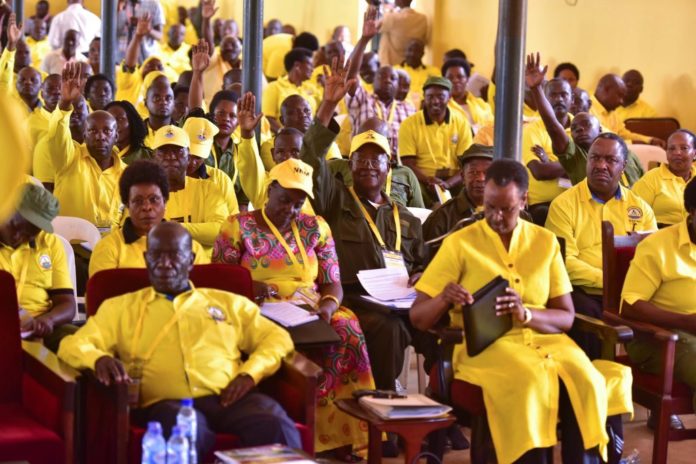 A parallel parliamentary NRM caucus has been created to compete with the Buganda Parliamentary Caucus at their retreat in Kyakwanzi. The caucus includes National Resistance Movement (NRM) legislators from Buganda region, to coordinate NRM activities and have one voice when lobbying for Buganda from government.

Their activities will include lobbying projects and programs from government that will benefit the entire Buganda region as well as supporting kingdom projects that are meant to benefit Buganda at large.

Bukoto South MP, Hon Muyanja Mbabali was elected the treasurer to the caucus.

Hon Ruth Nankabirwa Ssentamu, the Chief Whip and Kiboga Woman MP, was elected the Ex-Official on the new caucus.

Hon Sam Kahamba Kutesa was voted patron of the caucus.

Hon simeo Nsubuga after concluding the vote said that Buganda parliamentary caucus still exists in power combining all legislators from Buganda region despite their political differences.

The Buganda Parliamentary caucus is chaired by the Mukono South MP Muyanja Ssenyonga who are rivals with some of the officials in NRM Party.

NRM counterparts from the opposition, strongly criticised the newly formed group arguing that it’s likely to create divisionism among members in the Buganda parliamentary caucus.

Barnabas Tinkasimire, the NRM Buyoro Parliamentary caucus chairperson, was dropped in the caucus meeting proceedings in Kyankwanzi and replaced with Stephen Mukitale as the new chairperson.

Tinkasimire says the new Constitution of the caucus has been revoked by the caucus proceedings in Kyankwanzi.

“Actually they are supposed to vote from parliament. And actually they are supposed to vote from Kampala, according to the Constitution. Inside parliament in the prefix of parliament and not in Kyankwanzi. I don’t know how they did it but I will wait to look at the minutes, where they moved a motion of no confidence because I am the legal, duly elected chairperson. Therefore, to remove me you must first move a motion of either vote of no confidence.”