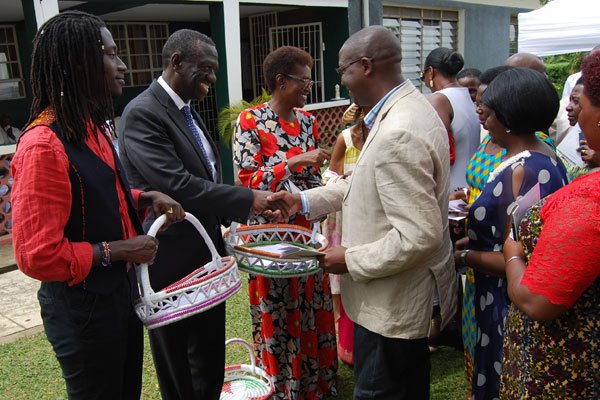 For the sake of Ugandans and Uganda in particular, former Mbarara Municipality MP, also the Executive Director Oxfam International Winnie Byanyima has called upon unity in opposition leadership.

This was on Saturday at a family thanksgiving service of her 60th birthday celebrations in Mbarara District Nyamitanga Division at Byayima’s Green Cottages in Ruti Ward.

“I am here for unity of our people, I am calling on us to overcome our differences. Leave the small world of I’m this religion, I am this tribe, think nationally and beyond. I am sorry about the divisions in Opposition, I’m really sad. If we can come together and look for opportunities for our people, we don’t need to divide ourselves and lose opportunities, let’s come together,” Byanyima said.

However, she added that Uganda and Africa at large, have their attention on polarisations while for the whites, a country is their first priority no matter what happens between them including internal Divisions. That’s why they are successful politically, economically and socially.

A way from that; Byayima argued all Ugandan to speed up their demand on government to create jobs for the young people in the country adding that her campaigns on job creation for the youth will not end until government addresses her dream.

“What hurts me is having educated people who don’t have jobs. In United Kingdom (UK) and America (USA), the president gives report on jobs created monthly. Do we ask ours? What we do is clap and give them more votes. Youths don’t have jobs yet we don’t question leaders about that. Let’s ask hard questions such as where are opportunities for our children’s? why are they not there? Let’s ask that every month, that’s my message.”

Byanyima, wife to former FDC president Dr. Kizza Besigye stressed further noting that; “what I can’t abandon is to fight for opportunities for our children to get better life, I have also produced, you have seen my son.”

Meanwhile, Dr. Kizza Besigye who stood for presidency 4 times and failed also the main opponent to president Yoweri Kaguta Museveni argued Ugandan to hold their hope asserting that 2019 is a year of political action.

Besigye besides political issues appreciated his wife Byayima for raising their boy up as a single parent. He stated that he felt the hardships single parents go through in raising children during the time he lived with their son for one month while in exile in South Africa when he was only 3yrs old and now he has grown up to 19 years of age.

Moments that manifested disunity in opposition leadership include; the recent Interparty, Organisation for Dialogue (IPOD) summit held at Munyonyo on the 12th of Dec 2018 that was boycotted by FDC.

Mike Mabike after having misunderstanding with DP left and formed Social Democratic Party.

General Mugisha Muntu separated from FDC after several disagreements in September 2018 and now hopes to form Alliance for Unity. He said earlier on that all plans to register the party are already lined up.