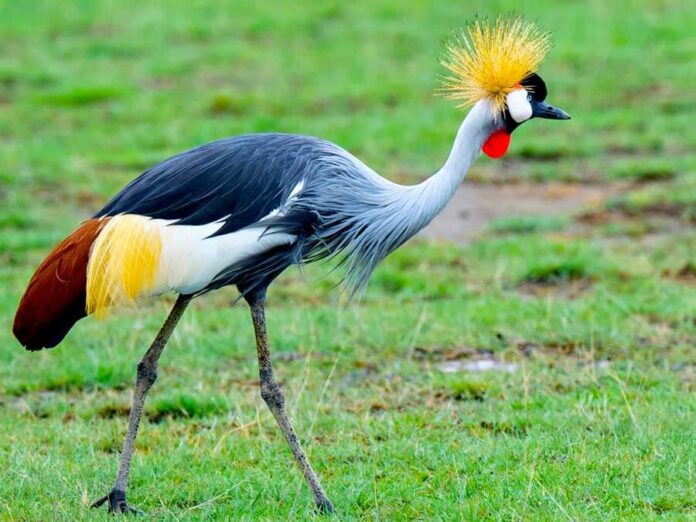 The number of birds discovered in Uganda, Africa’s top birding destination, is endless. Many of these birds only exist in Uganda’s distant jungles, with rare sightings, although some may not even have been identified yet.

As one of Africa’s top birding destinations, Uganda has an endless number and variety of birds. Many of the birds residing in Uganda’s distant jungles have yet to be identified, but many of these species are found only in these tropical forests, and some have only been seen a few times.

Uganda is the go-to country for bird enthusiasts. So far several birding tours have been set up and everything can be arranged including transportation to popular birding destinations in Uganda.

Listed below are some of the most commonly seen birds in Uganda.

Africa is the only home of the Shoebill, and birders from all over the world travel to Uganda to see this awkward creature.

Before the Uganda Bird Guide Club’s efforts were successful in making it unlawful to trap these birds and steal their eggs, this bird was not protected for a very long period, and its eggs were routinely stolen from nests.

It may be spotted in the Mabamba Swamps in Entebbe, on the Nile below Murchison Falls, and at Lake Albert in Semliki Wildlife Reserve.

The largest bird in the world, a native of the savanna, is only found in Kidepo and the extreme northeast of Uganda. It can also be observed at the Entebbe Zoo.

Despite being reasonably abundant in the countries of central Africa, the Green-breasted Pitta is a challenging bird to locate. A bird lover’s fantasy is to capture one of these small fellas in the lowland tropical forests where it dwells, where it is expertly disguised.

Shelley’s Crimsonwing is one of the rarest birds in the world and birders can only dream of seeing one.

They reside in the Albertine Rift, a narrow band of mountains and volcanoes that straddles the borders of Uganda, Rwanda, and the Democratic Republic of the Congo.

This is the only known image of this rare beauty, and photographs of these beauties in the field are nearly nonexistent.

The third of three species of red bishops that may be found in Uganda, all of which are small, colorful, black-and-red birds that prefer reeds and rough grassland, is this one with the greatest distribution.

A macabre, 1.5-meter-tall carrion-eating stork with a feather design like an undertaker’s outfit and a big expanding airbag below its neck. Common in both urban and rural settings, but especially prevalent in central Kampala and Entebbe Town

The males of this beautiful bird develop central flying feathers during the breeding season, which gives it its distinctive appearance. It is a dream to observe these birds during this brief period when their feathers can stretch up to 38 cm in length, raised vertically during the show.

These vividly colored birds are one of the most frequent birds observed in Uganda, and happily, their population numbers appear to remain stable for the most part. They are found in the subtropical montane forests and moist shrublands of central Africa.

While it is rarely seen, this lovely medium-sized bird inhabits high-altitude woodlands across most of central and southern Africa.

Few people have ever seen the enormous Black-breasted Barbet, which is eagerly searched after by bird enthusiasts. Tourists to this region rarely encounter it because it typically inhabits conflict zones, with Uganda being one of the safest places to perhaps observe it.

The Crane is the national bird of Uganda. They are huge, long-necked birds with long legs. Cranes fly with their necks extended, not pulled back, unlike the similar-looking but unrelated herons. Most engage in elaborate and boisterous courting rituals or “dances.”

This Red-billed dweller of still lakes and rivers with overhanging foliage is common but elusive. It is a bird species that many African birders dream of seeing, and it can be frequently seen on boat safaris on Lake Mburo and in Queen Elizabeth National Park.

In both the Western and Eastern Hemispheres, flamingos are gregarious wading birds that are typically 3 to 5 feet (0.9 to 1.5 m) tall. Flamingos consume shellfish and algae as filter food. Their oddly formed beaks are uniquely employed upside-down to remove muck and silt from the food they consume.

Only the Itombwe Mountains in the Democratic Republic of the Congo and the Bwindi Forest in Uganda are home to this eye-catching bird’s vibrant colors. The species is deteriorating as a result of the destruction and clearance of its habitat in the forests.

The majority of savanna ecosystems, notably riverine thickets, are home to this brilliant black and red bird the size of a thrush. Its presence is frequently made known by loud duetting, which alternates loud liquid notes with a softer churring response.

Two of Uganda’s largest and most beautiful birds are the Great Blue and White-crested Turacos. Due to the high demand for their meat and feathers, these birds are actively hunted.

The Short-tailed Warbler is predominantly found in the underbrush of Ugandan woodlands, but it is also present in the forests of the Democratic Republic of the Congo and Rwanda.

Large water birds called pelicans have a recognizable pouch under their beaks. They have four-toed, webbed feet.

Though a few species of this small family are found in tropical Asia, most are located in Africa and can be spotted in Uganda as well. Other birds known as “flycatchers” are not closely related to them.

Commonly known as the snake bird due to its propensity for swimming low with a stretched, lengthened rufous neck (longer than that of any cormorant). It is quite widespread in most freshwater areas with the surrounding flora. It sits openly, frequently with its wings spread out to dry.

Smaller and less heavily built than other African crows, glossy black with a red eye, and usually found near riverine palms and wild cattle, these crows are known to devour disturbed insects. Prevailing in Murchison Falls and Jinja.

Birds are the world’s most famous travelers since they can take flight at any time without carrying anything.

Some migrate across hemispheres in search of a partner, while others congregate in stunning flocks together. These are some of the possible birds to see in Uganda.