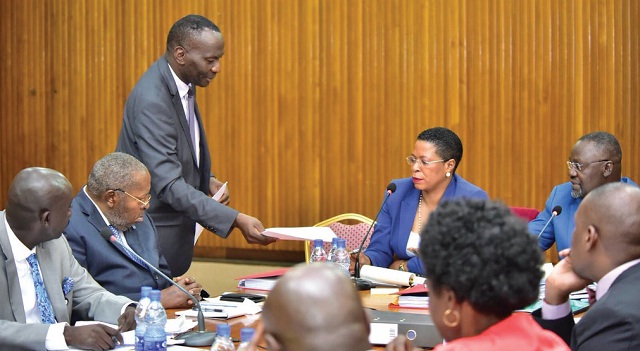 Bank of Uganda Officials were on Monday thrown out of the Parliamentary Committee on Commissions, Statutory Authority and State Enterprises, COSASE after failing to present documents backing their statements.

The officials led by Governor BoU Emmanuel Tumusiime Mutebile had appeared to defend themselves against accusations raised by the directors and shareholders of the closed seven banks who indicated illegality in the closure.

According to GTB shareholder their Business model was not made for fast profits, which BoU failed to understand.

In their explanations GTB shareholders say, between 2013 & 2014 they were to inject additional capital including US$10m in the business as demanded by the Central Bank. But they were not given time.

Thereafter, Abdul Katuntu the COSASE chair demanded an explanation from BoU officials why they responded negatively to GTB calls.

“You told them to inject money, they mobilised and put in. why should somebody put in US$10m knowing very well that this business will not break even? They said they knew the market and were persevering and looking for more resources and injecting in the bank knowing that in future they would break even. And you told them their future was hopeless, they said ‘why should we inject money in a business which is hopeless.”

“Mr Chairman, we have submitted in prior meeting sessions with this committee documentation and minutes which reflect the meetings between GTB an BoU where even the shareholders raised their concerns about the repeated cause for capital. Actually one of the reasons for closure of GTB was the concern by BoU that the shareholders were developing capital call for fatigue.”

And after his submission Twinemanzi was asked to present the letter to the committee seconding his presentation but failed claiming he submitted it to the committee. A claim rejected by the Committee chair.

Noting the whole submission as distorted because BoU did not produce any solid evidence seconding their submission. Which caused committee members to note delicacy in their presentation which prompted the COSASE chair to adjourn the meeting until Tuesday.

As they concluded the meeting, COSASE chair said BoU should avail reports and financial statements of International Bank, Greenland Bank and cooperative Bank.

Including proof explaining whereabouts of Nile River Acquisition Company that purchased the loan portfolios of the 3 banks on Tuesday, as they close the probe into the closure of seven banks. And after write a report which is to begin this week.