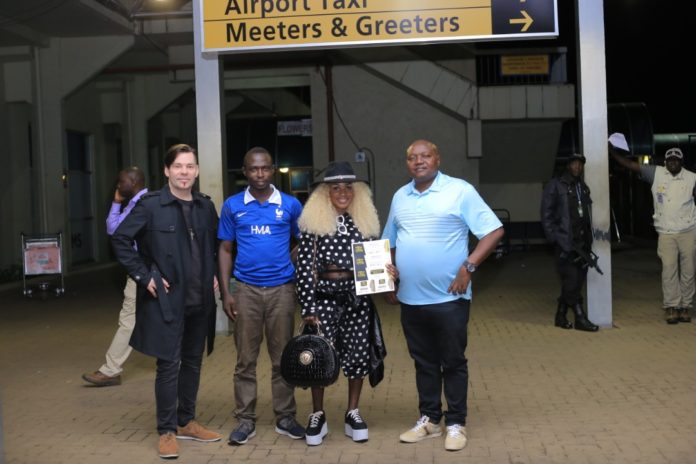 This Saturday HiPipo the organisers of Uganda’s biggest music awards in East Africa will be celebrating the 8th edition of HiPipo Music awards at a show slated to happen on 16th March 2019 at Kampala Serena Hotel.

And the latest news reaching Flash Uganda Media indicates that Denmark based Ugandan singer and vocalist Joanita Zachariassen who will be one of the performers alongside singers Sheebah Karungi, Kenneth Mugabi, John Blaq among several others.

Zachariassen arrived yesterday at Entebbe International Airport via Turkish airways at around 4:00 am and was welcomed by Innocent Kawooya, CEO and Founder HiPipo music awards among other people.

This year’s HiPipo Music awards have included 10 Africa centric categories including Africa’s Number 1 Award. The categories highlight excellent works of art from over 15 African countries. Africa’s Number 1 Award goes to an artist that has been a trailblazer across Africa on different measures during the 8th HiPipo Music Awards eligibility Year. To be considered eligible, an artist must have had active performance and/or released audio or video music content within 12 months prior to 1st November of every year.  The 12 months eligible period is for works (Audio or videos) commercially released between October 2017 to November 2018.

The gala event will have Tickets going for 100,000 UGX each while VIP Tables will cost only 3 Million UGX.