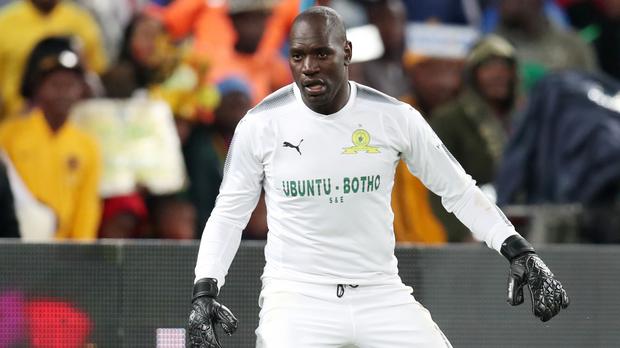 Dennis Onyango who was crucial in between the sticks against their match day opponents Polokwane City had a collision with Mbulelo of Polokwane and had to be hospitalized. However, fresh reports from South Africa indicate that Onyango who is also the Uganda Cranes captain is regaining his strength but his return has not yet been foreseen.

“Denis is in a stable condition, and will have multiple tests done following a serious head injury,” the club provided an update in a tweet.

Dennis Onyango had come out to collect the ball in the air but was challenged by Mbulelo who charged his elbow against Onyango’s face. He landed badly and stayed on the floor for a short time before being treated in the pitch and later taken to hospital.

Onyango’s injury has come at a crucial time when Uganda needs him most during the AFCON Qualifiers that will be underway shortly.

After being taken to hospital, he was replaced by Kennedy Mweene, a Zambian. Mamelodi won the game 2-0 through Ricardo Nascimento scoring with a header from a Gaston Sirino assist in the 17th minute and Lebohang Maboe rising high to beat Polokwane goalkeeper George Chigova in the 53rd minute.