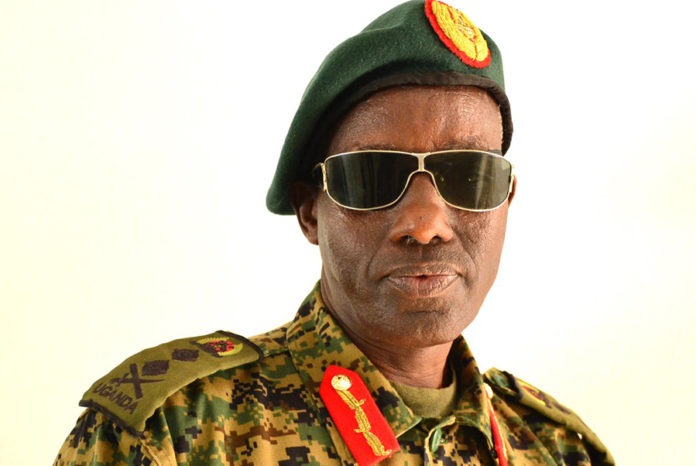 The Minister for Security, Gen Elly Tumwine has started a nationwide campaign aimed at sensitizing all Ugandans to be alert – regarding their personal safety and security. He reckons, that is the starting point of national security. In a guide he authored ‘Complementary Security Guide’ which will initially be shared electronically, but eventually printed; he highlights threats to individuals, communities and the nation. The guide details how to detect, prevent & respond to these threats. He is putting the individual at the heart of national security under the sub theme: ‘It starts with you’.

In a presentation to Journalists at the President’s Office conference Hall, the four-star General delved into the nitty-gritty of what security entails in simple illustrations such as AKU= Awareness, Knowledge, Understanding. WAR=willing, able & ready –OCI=Organising, Co-ordinating & Inclusion – TPAE=Thinking, Planning, Action & Evaluation.

The General highlighted the fact that Uganda’s education system does not equip citizens with key critical skills in areas such as security, home making & healthy eating. As such, he reckons there are gaps that should be filled using alternative methods such as the campaign he launched.  He said it surprises him to see Doctors at Mulago eating junk food in their cafeteria, as if unaware that diet matters.  “We are what we eat” so, why do some Ugandan doctors and many other educated people not mind about their diet?

Why do some of the elite consume dangerous levels of alcohol and smoke their lungs out when they are enlightened?

Gen Tumwine told Journalists that he had opted to speak to the media first, since they were the purveyors of news and information. He asked that they join him to disseminate the information on all the platforms available to them.

“We are what we know, we become what we see, hear, experience but most importantly what we do about it” the General said.  He highlighted the role of the individual in security and gave tips for taking charge not only of your security but that of others as well.  He analysed threats from both criminals and terrorism emphasizing that the first step is vigilance by all. He asked journalists whether they were always on the lookout for any suspicious people, vehicles, circumstances, or if they just move about without due care or attention. He talked about environmental security and embracing the digital age but take caution because of increasing cyber insecurity. He gave the example of a snail which always uses two antennae while moving.  “It pulls out one antenna and if it hits anything in that direction, it coils and pulls out another antenna in a different direction. If it detects no obstacle or danger, it will move in the safe direction”

He highlighted the good and bad in all human beings and said that the role of security is to maintain a higher percentage of the good so they can overcome evil schemes by the bad.

Gen. Tumwine’s postulations brought me back to a subject I have written about before.  As individuals and communities, are we doing enough to tackle insecurity, be it criminal, terrorism or minding public safety on the Roads? Do we drive with due care and attention? Do we avoid drink – driving?

It is worthwhile being alert and vigilant at all times. I have young relatives still at campus. Some of the stories I hear quite often are those of snatched phones and handbags.  When I inquire into incidents, I find that there was no vigilance or safety precautions just before the incident. Some could have been avoided.

As you move about your business, more so in urban places, please be ‘switched on’. Thieves on foot and on wheels are lurking about waiting for an opportunity to pounce.

Always carry suspicion with you as if it were your second nature.  Some taxis are dens of thieves. But a close examination after incidents reveals that they could have been avoided. Scan the people in the vehicle first, look at the way they approach you, look at them in eye – observe where they are parked. Thieves in taxis don’t always use stages; they want to pick you on the road, at random. They always appear overly helpful, wanting to open and close the doors.

Do you take interest in your neigbours? Do you know your local Police Officer in Charge? Do you, as neighbours talk about safety and security and discuss what actions you would take in case of emergency? Do you have the phone numbers you need to call if you had to? Have you taken advantage of technology and social media to create a neighborhood group where you can add security officers?

On your journeys, always have something that identifies you.  A copy of your national, student, or work ID. Originals can be tricky to replace, don’t carry them everywhere. Keep an ICE – (in case of Emergency) contacts in your phone or pocket diary for your next of kin, or the person you would want notified if there was a necessity.