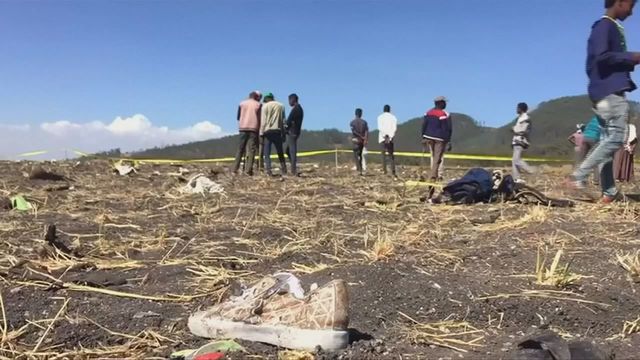 Recent findings on the crashed Ethiopian Aircraft indicate no survivor, all passengers on board died according to the State broadcaster.

“There are no survivors on the flight, which carried passengers from 33 countries.”

A Boeing 737 MAX-800 Aircraft, flight ET302, had 147 passengers plus eight crew aboard from the Ethiopian capital to Nairobi.

In total 157 passengers were on board including Kenyans who were said to be 32, Americans 8, Canadians 18, British nationals 7, Chinese 8 as confirmed by the China’s State Media among others.

According to the Airline Statement the plane left Bole International Airport at 8:38 am on Sunday and after six Minutes on its way, it lost contact with air traffic control.

And it’s still unclear what exactly caused the crash.

An eye witness present at the scene said that the moment the aircraft fell on the ground, an intense fire erupted.

“The blast and the fire were so strong that we couldn’t get near it, everything was burnt down.

737 MAX-8 Aircraft was launched in 2016 and in July 2018, it was added to the Ethiopian Airlines. Meaning it’s relatively new to the skies.

Boeing offered to send a team of technicians to assist them after feeling “deeply saddened.” By the incident.

Another Aircraft of similar model was involved in a crash 5 months ago when a lion Air flight crashed into the sea close to Indonesia carrying 190 passengers.

Investigators revealed that the plane pilot struggled with the automated system anew feature of the Boeing 737 MAX designed to prevent stalling of the aircraft.

They also said despite several attempts made by the pilot to correct the mess, the anti-stalling system continuously dragged the Aircraft’s nose down.

Ethiopian Airlines makes direct flights between the capital cities of countries in Africa, neighbouring Ethiopia. Rating it a popular air transporter in Africa where many Airlines make trips from their home country to several destinations beyond the continent.

In 2010, one of the company’s aeroplane crashed in the Mediterranean Sea and killed 90 passengers shortly after leaving Beirut. But despite these accidents occurring Ethiopian airlines has a memorable safety record.

Ethiopian Airlines deadliest accident was in November 1996, the Plane crashed during a hijacking on a flight from Addis Ababa to Nairobi.

The aeroplane ran short of fuel and one of the engines stopped. Pilots worked so hard to make an emergency water landing but all in vain.

The Aircraft struck a coral reef in the Indian Ocean killing 123 out of 175 passengers on board.

The flight tracking website flight trader 24, on its tweeter post said the Aircraft had unstable vertical speed soon after take-off.

Boeing 737 MAX 8, a lion Air, crashed into the Java Sea, killing all passengers on board shortly after take-off from Jakata the capital of Indonesia.

The Aircraft is one of the world’s bestselling modern passenger aeroplane and the industry’s most reliable and the latest version from the 737 family.