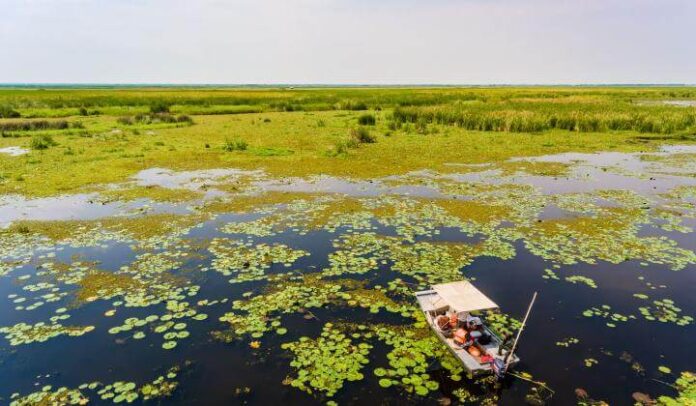 Uganda is a country with plenty of wildlife as well as swamps and other vegetation which makes it an ideal destination for swamp vacations.

Table of content: A guide to the major swamps in Uganda

Ever thought of visiting the swamps in Uganda? Uganda is a country that has been blessed with not just wildlife but also a large concentration of swamps and other vegetation.

A swamp is a type of wetland that is always submerged in water and accompanied by trees. They are beneficial to both human beings and animals as well.

The most valuable ecosystems on Earth are swamps. They function as enormous sponges or reservoirs. Swamps and other wetlands absorb surplus water when there has been a lot of rain, which lessens the impact of flooding.

Coastal communities are additionally shielded by swamps from storm surges that could wipe away the coastline.

A few people rarely consider visiting swamps in Uganda but we’re about to change that for you. Swamps do have a lot to offer, especially those that we’ll be sharing.

In this article, we discuss the major swamps in Uganda and more. Here they are;

One of the best wetland birding locations in Uganda is Mabamba Bay Swamp. It is well-known for the Shoebill, which is the country’s most sought-after bird by both Ugandan birding visitors and nature enthusiasts.

West of Entebbe, on the northern bank of Lake Victoria, is the Mabamba Swamp, which has dense marshes of papyrus, water lilies, and other wetland grasses totaling 2424 acres.

A wetland on Lake Victoria known as Makanaga is regarded as a component of the Mabamba Ramsar site and Important Bird Area (IBA). It is well known as another location in Uganda to witness the well-known Shoebill.

Mpigi District is where Makanaga is located. Driving there from Entebbe and Kampala takes an hour and a half.

The Makanaga swamp has proven to offer great, if not better, sightings of the Shoebill and many wetland birds on the vast open mudflats and swamps. It is not as well known as the Mabamba wetland, which is the first choice for Shoebill-watching trips and wetland birding in Uganda.

A motorized canoe may easily pass Makanaga and access the wide mudflats where large flocks of wintering birds congregate from October to May. Additionally, the swamps are home to numerous elusive birds including herons, crakes, rails, and warblers among others.

Today, the Bigodi Wetland Sanctuary is home to 138 different bird species. The majestic Blue Turaco is one of the sanctuary’s most notable bird species.

More than 200 different bird species can be found in this wetland, including the most well-known bird, the Great Blue Turaco.

The swamp is managed by the Kibale Association for Rural and Environmental Development, and it gains a lot from the nearby Kibale National Park because it occasionally receives visits from several primates, including chimpanzees. This broadens the variety of wild animals that visitors can see in the Bigodi.

The Nabajjuzi Wetland is crucial for the preservation of endangered and fragile species of birds and other animals both locally and globally. Nabajjuzi has records of the Shoebill.

The Grey Crowned Crane, whose survival in Uganda is in jeopardy due to encroachment on its breeding grounds, is supported by the wetland as well.

Fish, clay, papyrus, other crafting supplies, and other animals can all be found in the swamp.

On the northern and western outskirts of Kampala, Uganda’s capital and largest city, is Lubigi, a swampy wetland.

Beginning about north of Kisaasi and extending westward through Bwaise and Kawaala before extending south through Busega, Lubigi creates an atypical semicircle that encircles Kampala.

More than half of the Kampala Northern Bypass Highway is constructed within wetlands. The entire Lubigi marsh serves as the foundation for the Bwaise slum.

The Lubigi Wetland, which supplies water to Kampala and the nearby Wakiso District communities, is a crucial water catchment area.

Through surface runoff and underground aquifers, rainwater from the city’s northern and western suburbs drains into the swamp, which is home to over 200 species of birds, including the crested crane, the country’s official bird.

The swamp also supports a variety of rare wildlife. Papyrus grass is the major plant species. It’s safe to say that Lubigi Swamp is the largest swamp in Uganda.

This wetland floodplain is significant for its capacity for hydropower generation, Shea Butter nut products, charcoal, and firewood, as well as water for home and agricultural usage.

The Moroto River serves as the primary water supply for Otuke District’s Water for Production dams and domestic usage.

This delta in Lake Albert is connected to significant wetland systems. The lower stages of the river’s meandering channel have frequently changed due to bank erosion brought on by rising snowmelt from the Ruwenzori Mountains, overgrazing, and other changes to the watershed.

In certain spots, Uganda loses up to 10 meters of land per year along its riverside due to erosion, and the southern end of the swamp is gradually being filled in with sand from the Semliki.

These are some of the most known swamps in Uganda. They are very essential for the environment mainly as a wildlife habitat. These swamps are home to some rare birds such as the Shoebill Stork, crested cranes, Papyrus Gonolek, and the Papyrus Yellow Warbler.

They also promote the growth of certain plant types which act as a source of food for people in the area, raw materials, water supply, and a tourist attraction for others. These and many others are why swamps need to be preserved and protected.

Tourists are free to visit any of these swamps in Uganda especially the Mabamba and Mkananga swamps. We guarantee that you will appreciate their importance and never see them in the same way again.