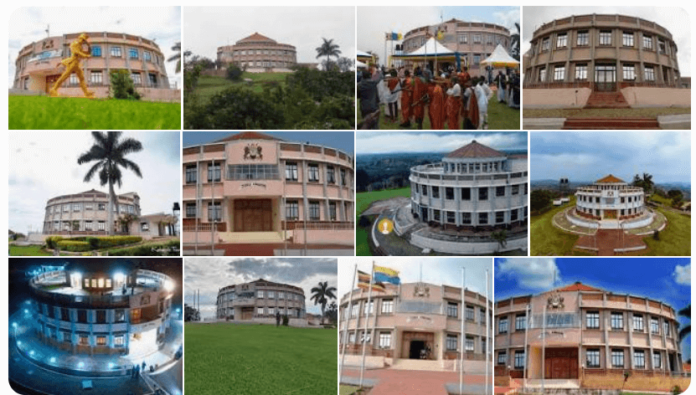 Located on a hill in the middle of Fort Portal town, the Tooro Kingdom Palace is also known as the Karuzika Palace.

Table of content: A Guide to the Tooro Kingdom Palace

On a hill in the middle of Fort Portal town sits the Tooro Kingdom Palace, which is also referred to as the Karuzika Palace in traditional usage.

Architecturally, the Palace building is round and provides a 360-degree panorama of the Fort Portal town. Many official Tooro Kingdom events, like the King’s coronation, are held at the Karuzika Palace.

The History of the Tooro Kingdom

One of Uganda’s four former traditional kingdoms, Tooro was disbanded in 1967 but then revived in 1993. The actual kingdom was established in 1822 after Nyamutukura Kyebambe III, the eldest son of the Omukama of Bunyoro-Kitara, rebelled against him and left to start his kingdom of Tooro.

He took the southern portion of his father’s kingdom with the River Muziizi serving as their border. He was called Olimi I of Tooro. He declined requests to succeed his father as Omukama of Bunyoro-Kitara when he passed away 13 years later. Instead, he chooses to continue as the ruler of the Tooro Kingdom.

His third son, Rukirabasaija Kazana Ruhaga, succeeded him and ruled from 1865 to 1866 until being assassinated by his brother, Rukirabasaija Kasunga Kyebambe Nyaika. This son then took the kingdom by force.

In support of Nyaika’s younger brother, Rukirabasaija Kato Rukidi, an army from Buganda attacked the Kingdom of Tooro in 1871, ending Nyaika’s reign. However, Rukidi’s rule was to be brief. This is because the Tooro people rejected him, in part because of Buganda’s role in his succession. It was then that Nyaika was put back on the throne.

The kingdom was absorbed back into the Bunyoro-Kitara Kingdom from 1880 to 1891. Its independence was restored with Rukirabasaija Daudi Kasagama Kyebambe III taking the throne and ruling until 1928 as part of a deal with the Imperial British East Africa Company.

Nyaika himself died the following year, and after a period of brief reigns by his feuding sons, the kingdom was absorbed into the Bunyoro-Kit (IBEAC).

Kyebambe instituted Christianity in the kingdom; he was succeeded by his son Rukirabasaija Sir George David Matthew Kamurasi Rukidi III (above), who ruled until Milton Obote declared himself president of an independent Uganda in 1967. He abolished the monarchy.

Rukidi III oversaw the construction of the Tooro Royal Palace not long before the kingdom was abolished; however, after the monarchy was overthrown, it quickly fell into disrepair and eventually ended up ransacked and ruined. This was a result of internal wars in Uganda in 1979.

Luckily Muammar Gaddafi, the president of Libya at the time, provided funds to have it restored in the early years of the new century. He made this decision after forging a close relationship with Tooro’s infant.

Olimi III, Rukidi’s fourth son, took over as king in 1965. However, after losing his royal status, Olimi III joined the Ugandan Foreign Service and served briefly as state ambassador to Cuba.

After the traditional Ugandan kingdoms were restored, he was reinstated to the throne in 1993. He passed away two years later, in 1995, and his infant son Rukidi IV, the current king, succeeded him.

Tooro Kingdom Palace: What to See and Do

Tooro Kingdom Palace presents a history to learn about and a variety of things to do and see. Among the things to see include caves, crater lakes, waterfalls, Rwenzori Mountain, and the nearby Kibale National Park which is popularly known for its gorilla-tracking activities.

The Tooro Kingdom Palace can be visited at any time, either morning or evening. Remember to carry UGX 10,000 as it’s charged for parking at the premises. You will learn about the founding of the Tooro Kingdom, and the ancestry of all subsequent monarchs.

The guide will also share a lot about the cultural and traditional practices of the Batooro people, while you’re visiting the palace.

Here are the most preferred tourist attractions in and around the Tooro Kingdom Palace.

This is where a number of the former and deceased Kings of the Tooro Kingdom are buried. The Tooro Kings’ items, including drums, crafts, spears, shields, and other royal regalia, are preserved in the tombs, which are roughly 4 kilometers south of the Royal Palace.

This is a hidden tourist destination where you may learn about the history of the Tooro Kingdom, Tooro culture, and the lineage of the Royal Family. The graves of numerous more royal family members, including the princes and princesses, are located right outside the Royal Tombs.

The name of these caverns, Amabere Ga Nyina Mwiru, translates to “Breasts of Nyina Mwiru,” It comes from a popular folktale about a king who, after his daughter failed to bear him an offspring would succeed him to the throne. He cut off her breasts to prevent her from ever being admired by a man.

To his dismay, the king’s daughter became pregnant while being hidden in those caves. Traditional belief holds that the breast-like formations in the cave are her breasts, which grew there when she was pregnant.

There are lots of colobus monkeys and tropical plants all around the cave. On a Western Uganda tour, this is a fantastic place to stop by to enjoy the cool waterfalls and a nature walk.

The Tooro Botanical Gardens, a location for reforestation, was established in 2001 with a focus on planting and preserving numerous tree species and plant life that was in danger of extinction in Western Uganda.

The renowned Mountains of the Moon, Mountain Rwenzori, the only snow-capped mountain in Uganda, can be found in the Rwenzori National Park.

It’s becoming a premier destination for trekking and mountaineering. You could visit it right after checking out the Tooro Kingdom Palace. It offers the best trekking opportunities due to the broad variety of flora and animals.

Semuliki National Park is located in the Bundibugyo district about 50 kilometres west of Fort Portal. It is well-known for its Sempaya Hot Springs and the presence of the Batwa pygmy community.

You can engage in activities like chimpanzee trekking, game drives, pygmy community culture tours, birding, visits to the Sempaya hot springs, and nature walks within the game reserve while at the national park.

In the past, the lake has also been called Lake Mobutu Sese Seko, Lake Mwitanziga, and Albert Nyanza, but the name Lake Albert has stayed throughout time.

Around 40 different fish species of varying sizes may be found in the lake’s six main types of fish habitats, with the Nile perch and Nile tilapia being the most prevalent. You may go bird viewing, kayaking, sightseeing, sport fishing, and boat tours when visiting Lake Albert.

Tooro Kingdom Palace: How to get there

When using public transportation, the Link Bus departs from the bus station near the new Taxi Park in Kampala. At, UGX 25,000 you get a ticket from Kampala to Fort Portal, and UGX 5,000 gets you on the Link bus from Fort Portal to Kasese.

At ten in the morning, the first Link bus departs Fort Portal for Kasese. The first van leaves around 7 AM for a fee of UGX 6000 from Fort Portal to Kasese.

On the Fort Portal – Kasese Road, on Karuzika Hill, with a view of Fort Portal, is where you’ll find the Tooro Palace.

To visit the Tooro Kingdom Palace, you will be allowed to take a stroll around, although you may not be allowed to enter inside. With the help of a guide, he/ she will educate you about Tooro’s history, culture and everything about the palace.

Other tourist attractions within the Tooro Kingdom Palace can be combined to make your visit to Fort Portal more fun.

Remember to carry binoculars, a camera, an umbrella, because it could rain, plus a notebook and a pen.