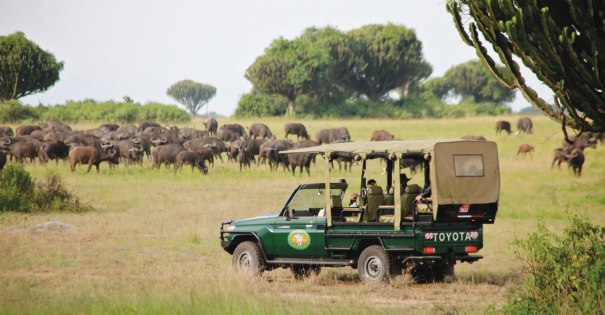 A search and rescue mission by police and UPDF for an American Tourist and his guide has started, after they suffered a kidnap in Queen Elizabeth National Park Kasese, on Tuesday 2 2019.

A report from Uganda Tourism Board and Uganda Wildlife Authority, stated that this Tourist alongside his guide were surrounded by four gunmen while on a game ride in the Tourists car at around 5pm and 7pm.

“The outlaws put the occupants on gun point and abducted two of them including a Ugandan driver and an American Tourist.”

John paul Mulenga of wild frontiers was the kidnaped driver, who was driving the Tourists vehicle. And the vehicle had three Tourists; a male tourist and two female tourists all of them from Buhoma.

However, these kidnappers only picked the male Tourist and spared the two females. This incident occurred in Queen Elizabeth National Park at Katoke Gate and the wilderness camp along Edward track.

“All security agencies such as the Uganda police and the Uganda People’s Defence Forces (UPDF) including wardens from the Uganda Wildlife Authority (UWA) have joined in the hurt for these outlaws with the main aim of safety securing the hostages. The life of the kidnapped are a key priority during this process. We appeal for calm as we shared with the public as it comes in.”

Polly Namaye, the Deputy Police spokesperson, in a media briefing on Wednesday afternoon said that a notice has been given to the US Embassy in Kampala regarding the Kidnap of Kimbley Sue Endecott an American citizen who is 35 years of age.

“We want to inform the public that all visitors in the country that the joint security have cut off all areas on the border between DRC and Uganda in the search for the victim since the park is along the border.”

She continued to say that this is the first time incident after a long period of time and argued the public as well as the Tourists to be strong because the area is once again safe.

“The kidnappers using one of the victim’s phone have demanded for 500,000 (SHS1.8bn) and we believe this ransom is the reason behind the kidnap. We appeal for any information that could lead us to apprehend the suspect and rescue the victims.”