Who is Hellen Asamo? Flash Uganda Media looks at her biography, age, husband, family, tribe, and relationship with NRM Parliamentary Caucus, Soroti District, the early life and education of the current Minister of State for Gender, Labour and Social Development (Disability Affairs) in Uganda.

She is the current Eastern region’s Member of Parliament for people with disabilities. She also served in the ninth and tenth Ugandan Parliaments in the same portfolio.

Hellen is also the Minister of State for Gender, Labour and Social Development (Disability Affairs) and a member of the National Resistance Movement (NRM) political party.

Hellen Asamo was born on 24th April 1964 in Soroti District. She is a married woman. She finished her Primary Leaving Examination (PLE) at Soroti Primary School in 1977.

She then enrolled at Nkoma Secondary School to earn her Uganda Certificate of Education, which she did in 1981.

She received a Grade III Teaching Certificate from the Kyambogo Institute of Teacher Education in 1990. She later earned a second education diploma from the same institution in 1996.

She graduated with a Bachelor’s degree in Teaching from Kyambogo University in 2006.

She particularly enjoys organising events, giving to those in need, providing counselling, and participating in community activities.

Travelling, making new acquaintances, listening to church music, reading fiction, and having dialogues are some of her hobbies.

Between 2002 and 2003, she became a member of NUDIPU (National Union of Disabled Persons of Uganda) an indigenous Umbrella NGO of PWDs which was formed in November 1987.

Hellen has served as a member of parliament since 2011 and currently represents people with disabilities in the Ugandan legislature.

She has been an executive member of the National Women’s Council since 2002, and she continues to hold this role. The council is tasked with formulating policies to promote higher expenditures for women’s projects.

Since 2016, Hon. Asamo has been on the board of the IGAD committee on women, peace, and security. She presided over the International University of East Africa’s University Council from 2014 to 2017.

She has also been a member of the committee for Legal and Parliamentary Affairs since 2018.

She also performed additional duties at the Ugandan Parliament, including serving as a member of the committees on Gender, Labour, and Social development, as well as appointments.

She was elected to serve as the Eastern region’s representative for People with Disabilities in the general elections of 2021, and she won.

Honourable Asamo Hellen Grace has more than 20 years of professional expertise in advocacy, community outreach, and legislation as well as gender equity and gender roles.

In the 10th Parliament of Uganda, she was also a member of the Uganda Women’s Parliamentary Association (UWOPA).

Hellen Asamo tabled a resolution of the NRM Parliamentary Caucus calling for President Museveni to serve as the party’s flagbearer in the 2021 elections without opposition during an NRM Retreat in Kyankwanzi.

Hellen stated that her primary motivation for supporting Museveni as the only candidate was to build on his successes in promoting peace and stability by guiding the nation toward prosperity, industrialization, and economic stabilisation.

Chief Magistrate Aanyu Margaret issued a court order on 17th September 2021 to block Asamo and any of her agents’ attempts to conduct the burial of her mother the late Iyapo Phoebe Auma which had been scheduled to take place on 18th September.

This was after her siblings Eryaku Isac and Martha Mbabazi Atai dragged her to court to stop the burial of their mother until they had all agreed on the burial place. The court ordered the body to be withheld by the funeral services until the matter was resolved before the court. 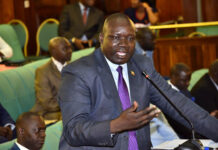