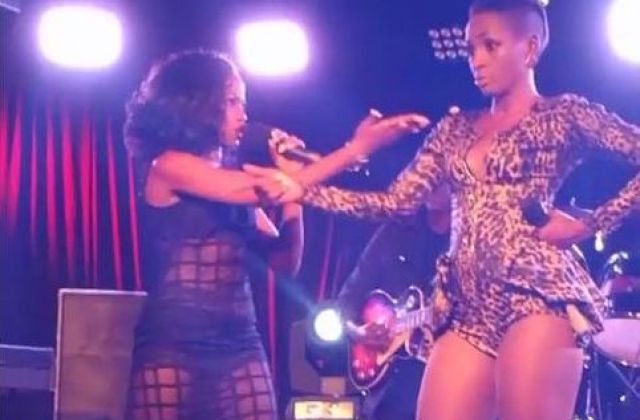 Following Cinderella Sanyu’s proposal requesting to have a music battle with Sheebah, the gap between the two has widened and perhaps continuing to widen.

The idea to have the battle was initiated by Cindy. According to Cindy she believes she can do better than Sheebah when it comes to live performances.

However, Sheebah returned fire to her greatest rival for the crown of Uganda’s finest female artistes Cindy, when it comes to Urban music.

In a Television interview, Sheebah made a mysterious response towards the proposal saying that the greatest need between her and Cindy is to help one another but not battling.

Sheebah says, Cindy’s claim that she’s better than her musically is not the way to go but teaching her how to sing.

“I will speak for myself as a woman who loves to support fellow females in the music industry. I control and respect myself and I know my limits regarding other people’s businesses. Instead of Cindy giving me a battle, let her come and teach me how to sing. Am ready to learn and practice with her.”

In addition, Sheebah says she’s financially well and owning a house. She continued to say that she’s also willing to take Cindy around her Munyonyo .

Sheebah in her views claims the punches aimed at Cindy were well-defined.

“I built a Mansion in Munyonyo so I want Cindy to help me learn how to sing and I will help her look for a land in Munyonyo and build her own house, which is the kind of achievement we need.”

Cindy, after getting Sheebah’s statement, answered back in a tweet saying she already built a house for her mum. So let Sheebah sign the battle paper and she shows her how music is done.

The swift turn followed the Team No Sleep star’s earlier unpleasant remarks at her co-singer Cindy, instructing Cindy to approach her so that she assists her build a Manson like she did. This came as a result of Cindy’s request to hold a music battle with Sheebah.

Also in a media briefing, when Cindy was tasked to state her view as far as Sheebah statement to assist her construct a house is concerned, she said, her number one priority at a moment is not a house but rather setting up her own business.

She disclosed that it’s not all about property but music. Because she also owns a property but hasn’t made show offs, and perhaps she does not need any help from her to construct her dream house.

“My first building target was to build a house for my mum and I did it. A house isn’t my first priority now, but having my own business, and I’m working on it.”

Cindy continued to say that her intended plan for the battle was to build her music career to a brand like Fenon record and silk events, so that she ends hiring organisers.

“I want people to know me for my music not property.”

“Sheebah is still poor at singing, especially live performances, and she needs to help herself and learn to sing instead of attacking me. Let her just go and rehearse. If she thinks she’s good, let her accept the challenge to the battle and I show her how it’s done.”

“You all saw her at her last concert. She still has a lot to learn, I understand if she refuses to battle, she cannot handle. It would actually be unfair to her if we stood on the stage,” Cindy added.

As far as thing are at a moment, the proposed music battle between the TNS singer and Cindy may not happen. According to what Sheebah said; indicating that at this time what she cares most is respect and loyalty.

“Am At A Point In My Life Where Am Only Interested In Respect And Loyalty.”

Cindy is more than ready to take on the battle while Sheebah says she will consider the battle if only Cindy respect her.