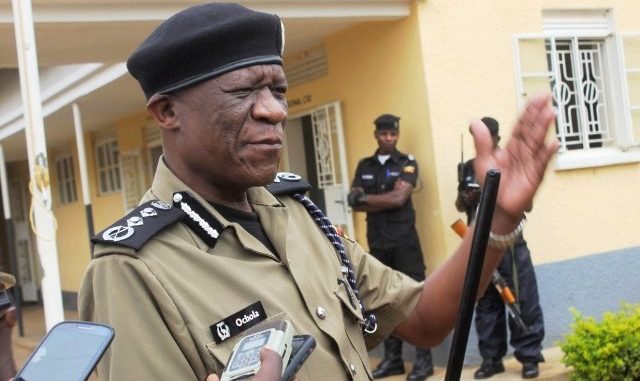 Martin Okoth Ochola the Inspector General of Police has warned police officers against torture crimes, stating that any officer caught in the act will be prosecuted.

Ochola says as long as he holds the position of IGP, he will not entertain hooligans in police.

“You cannot allow lumpens to take advantage that People Power and begin no! that must stop. You must exert authority.”

Speaking at a workshop of senior officers at the Police Senior Command and Staff College in Bwebajja, Ochola said that supporting People Power movement that’s led by MP Kyadondo East Robert Kyagulanyi Ssentamu is not a crime. After accusing police officers of torturing people power supporters.

“One time it went viral when some police officers in Kajjansi were torturing some people for being members of People Power. Is it an offence to belong to People Power! Under what section of the Penal Code?”

He continued to say that he will do whatever it takes to clean the stained image of police because torture is not a technique in carrying out investigations.

“We are tired of being ranked number one most corrupt institution. I know some police officers are corrupt when it comes to police services like bonds, canine unit and criminalisation of civil matters. But you cannot say the entire force is corrupt.”

Ochola admitted the mistakes police has done and promised to lay down strategies on how to conduct their operations in a professional way.

Adding that their major topic of discussion in this workshop is violation of rights of suspects and torture.

Deputy IGP Maj Gen Sabiiti Muzeeyi, stated that they are going to press lower officers to perform their duties as expected, much as government is working on security infrastructures by installing Cameras and figure prints on guns.