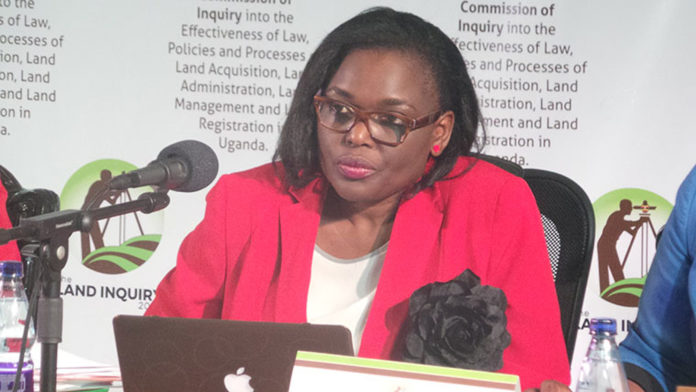 The Judiciary has criticized the Commission of Inquiry into land matters on the forum used over allegations of connivance between some judicial officers and land grabbers. In her communication to the press last week, the Chairperson of the Commission of Inquiry into land matters Justice Catherine Bamugemereire said their investigations had unearthed a syndicate between judicial officers and government officials who collude to forcefully evict people from land in disregard of the law.

Justice Catherine Bamugemereire condemned “bogus judgments and orders” in the eviction of bibanja holders, and warned that if the Judiciary, the third arm of the State, “does not rise to the occasion, it will be captured wholly by land grabbers.

In a statement, the Judiciary says it takes the issues raised by the Commission of inquiry into land matters seriously, and would appreciate if they are properly investigated to establish the facts, and make appropriate recommendations for a lasting solution.

However, the statement notes that the Chief Justice, Bart Katureebe is concerned with the mode used by the Commission of inquiry into land matters to communicate matters of such serious nature.

It further states that the judiciary would have expected the Commission to communicate findings of such a serious nature, in form of an Interim Report to the President, not a Press Release.

The statement says nonetheless, the judiciary will study the Press Release and try to work on it appropriately.

It warns that any judicial officer found to have acted outside the law will be dealt with accordingly.

The statement further notes that the Judiciary has on occasions interacted with the Commission of inquiry into land matters, and on 25th September 2017 it formally presented a detailed memorandum with recommendations, regarding land administration and adjudication in Uganda