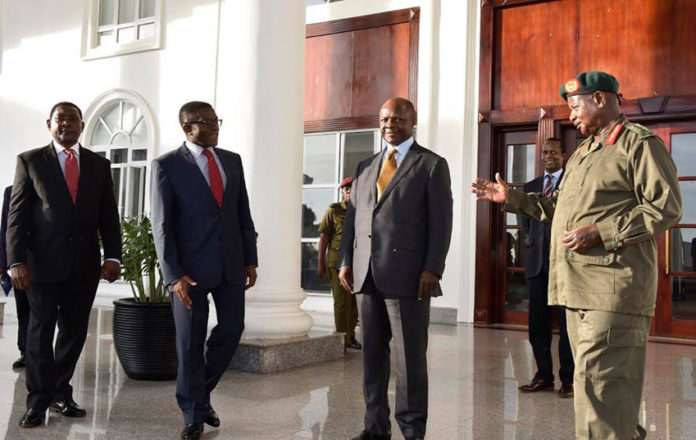 The president of Uganda Yoweri Kaguta Museveni paid a visit to the Kabaka of Buganda Ronald Muwenda Mutebi the II, accompanied by the Attorney General William Byaruhanga and Investment Minister Evelyn Anite.

Where they discussed a number of issues including the return of Buganda Assets and payment of monetary arrears to the Kingdom in the next 3yrs.

At 8:00am, in the morning the traditional bakisimba drum started sounding, loud and hard at Banda Royal Palace.

President Museveni arrived at 11am, received by the Kabaka and other Buganda officials including Prince David Wasajja Kintu.

And after President Museveni’s reception, both of them shared a light pleasantry on how beautiful Banda Palace view looked.

The two principals thereafter, held a discussion with both the Kingdom and Government Officials where president Museveni directed the Lands Ministry to return verified Buganda land tittles to the Kingdom with immediate effect.

Including paying back in full compensation properties that are occupied by the Central Government.

And after they went into a closed door meeting concluded at 2pm before the Kabaka saw off his guest.

In 1962, when Uganda gained independence, Sir Edward Mutesa, the then Kabaka of Buganda emerged the president of Uganda while Milton Obote who headed the executive became the prime Minister.

After 4yrs in 1966/7, the two clashed and Milton Obote pounced the palace, exiled the King to London and assumed his Executive power where he abolished Kingdoms existence in the country.

In 1986, president Museveni assumed the president’s office and restored Kingships in the country including mending the destroyed relation between Buganda and the Central government.

In 2009, thing went bad again, after the Kabaka was blocked from accessing Bugerere one of his Counties but later on, Museveni arranged a meeting with Buganda at State House to restore the lost relationship. And today the two Principals have so far held four meetings.

Trying to settle their differences which extended to the institutions they lead.

Since April 2017, this is their second meeting to discuss critical issues concerning Buganda’s belongings.

Buganda and Central government’s relationship starved when legislators, some from Buganda Kingdom were humiliated in the recent Arua conflicts.

And after, Katikiro Charles Peter Mayiga released a statement asking for their release and execution of justice.