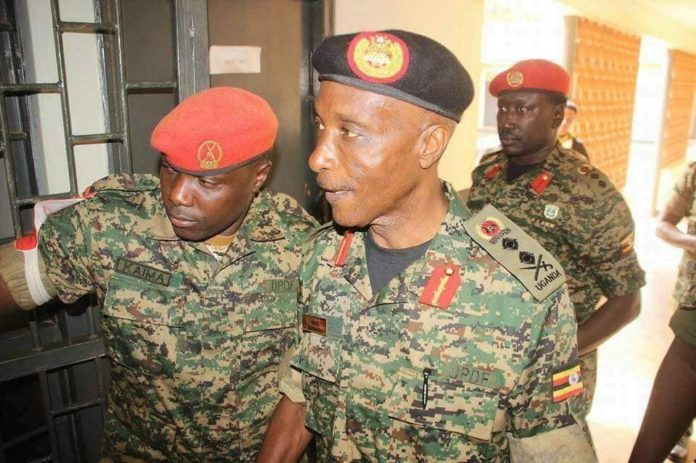 Former Inspector General of Police Gen. Kale Kayihura has applauded the UPDF especially the management of the Makindye Military barracks for the respectful treatment while in detention thus far.

Gen Kale Kayihura expressed the gratitude through his lawyers of Kampala Associated Advocates who said that their client was happy with the respectful treatment he has received since his arrest and detention on June 13.

The former Police Chief was arrested in June from his Country home in Kashagama, Lyantonde District and was flown to Kampala in a military chopper. He then met the CDF, Gen David Muhoozi before he was sent to Makindye.

Gen Kayihura is said to be detained in a two-bedroom apartment that is believed to be the commandant’s house in the Military Police Barracks at Makindye.

The General, according to sources has access to books for reading and that he has a stationary bike which he rides for fitness purposes.

Gen Kayihura is said to have a television set and is able to watch news and entertainment shows such as the English Premier League and other channels of his choosing.

Last month, Gen Kale Kayihura, through his lawyers said that he was in no rush to be charged, saying he wanted his accusers to gather the truth.

Now, today (Friday), the former IGP appeared before the General Court Martial chaired by Lt Gen Andrew Gutti and was charged with three offenses. Gen Kayihura was charged with aiding and abetting the kidnapping by commission or omission, repatriating Rwandan exiles and refugees and Ugandan citizens to Rwanda.

He was also accused of failing to protect war material by issuing arms to unauthorized persons including Boda Boda 2010 members led by jailed Abdallah Kitatta.

Court was also told that Gen Kayihura failed to provide accountability for arms and ammunition in the various Police units including the Flying Squad Unit, Witness Protection Unit and Crime Intelligence Directorate.

Gen Kayihura denied all the charges and Court set August 28 as date for hearing Kayihura’s bail application, while trial is set to start on September 4.