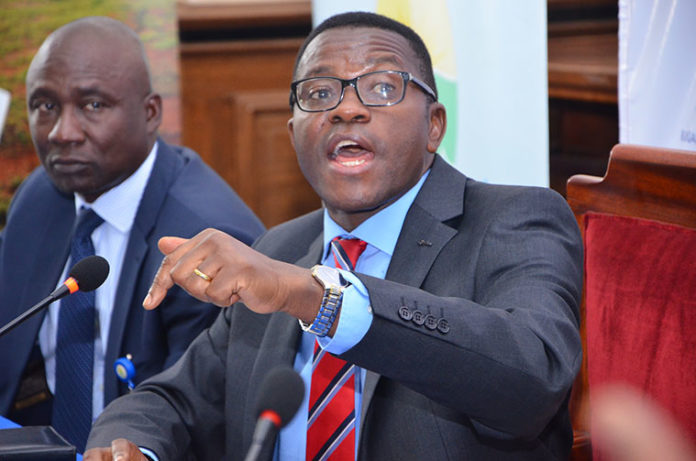 Buganda Kingdom premier Charles Peter Mayiga yesterday lifted up president Museveni’s government (NRM) during a lukiiko session, which has since attracted social media adverse reactions with some saying that the Katikiiro is moving away aimlessly.

Mayiga said that Museveni’s governance is far better than that of Iddi Amin Dada and Dr Milton Obote respectively.

“The fact is that in many ways, NRM is better than Amin and Obote. If one does not agree, he has not history.”

He said that it’s a mistake to make comparison of these separate regimes because they mean different ages.

Mayiga however, described both Amin and Obote as failures who failed to advance development in Uganda to the level of Singapore, Malaysia and Vietnam which in 1960s were at the same line.

And now, Mayiga is not having it well on social media platforms as he faces wild comments from the public.

Mathia Mpunga, the Masaka Municipality MP commented that people need to have understood Mayiga’s language and context used while Fred Collins said that Mayiga is a pure Muganda who knows that he is not supposed to talk while eating.

And Dr Besigye’s political assistant Ronald Muhinda, stated that Mayiga seems to have forgotten that he was once victimised by this same government he is praising.

As he referred to the 2008 Kidnap which included Mayiga and other Buganda icons like Betty Nambooze and Medard Ssegona under terrorism crimes.

During this time, president Yoweri Kaguta Museveni accused Mayiga and other Mengo palace ministers of;

“Breach of the Constitution by causing disaffection (kukyayisa) against the ruling NRM.”

Ever since Mayiga began mending central government and Buganda Kingdom relation, after his rise to the throne as the Katikiiro of Buganda he has always faced challenging views from the public.