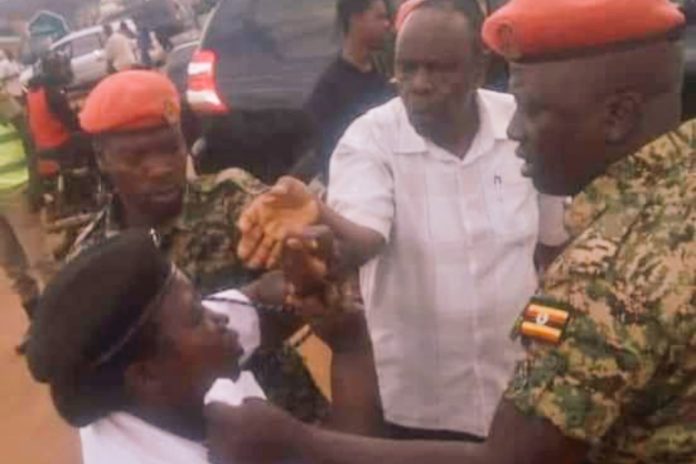 The retired Major General Matayo Kyaligonza’s two body guards found themselves in a spot light for assaulting A traffic officer Esther Namaganda, earlier on Sunday while on duty.

Kyaligonza’s car reportedly made a U-turn on a section of the road in Kireka which comprised a traffic misdemeanour pushing Namaganda to stop the vehicle.

The Army officers who were in the car (body guards) attacked Namaganda prompting condemnations from both the police and the Army to which Kyaligonza report.

Maj Gen Kyaligonza, was on his way to Mukono from Kampala at around midday on Sunday the 24 of February 2019, but made an unlawful U-turn when he cancelled his trip.

Maj General Kyaligonza and his Army escorts then assaulted the traffic officer, after she stopped them.

And seen getting out of the car and stopped not his Army officers from assaulting Namaganda. In a video that trended on social media platforms.

“And when I checked, I saw Army men, shortly one of them came out, seconds another one came out and said we want to pass hear. I said no,” Namaganda narrating.

Peter Otayi, a UBC Journalist present at the scene of the event was as well assaulted by Kyaligonza’s Army men when he tried to record the happenings.

“After them kicking me another one picked up a sword, I can’t call it a bennet because a bennet is small this one was a sword that they use for matching that’s the sword they pulled out. And the person who pulled out that sword was Okurut! He swung the sword at least, basically in my head I thought it was a burton. So I jumped away it passed and fell down it’s not until it fell down is when I realised that it was a sword.”

“Now in the process they coked their guns and when they coked the guns they thought I would move away but I insisted telling them what they were doing was wrong. Afterwards they entered their car and decided to drive away, but when I picked up my phone and begun taking photos the two soldiers were actually walking on the road like commandos lifting their guns in the air,” Otayi added.

Namaganda has filed a case of assault against Maj Gen Kyaligonza along with his two military officers.

“Why are you blocking us? I said no I am not blocking you but your driver knows why I am doing this. He said who are you? are you a Sargent? I said it’s good you’ve seen am a Sargent,” Namaganda telling a story.

Director of traffic and road safety in the Uganda police Dr Stephen Kasiima condemned the deed.

“We are considering a view of taking military action whether some people are above the law and others not above the law. But as far as I am concerned may be she is not the first traffic officer to be assaulted in similar ways. Our police officers have been assaulted they have even been knocked to death.”

“Police officers should be respected when they are doing their lawful duties. Nobody has the right to acquit a police officer on duty and am sure even the Inspector General of police and the entire police fraternity who are on this social media could be seeing all these happening.”

“May be when we meet with the management team, we normally meet weekly. We will bring it on table of the meeting may be they may take that into consideration when there’s that opportunity for promotion,” Dr Kasiima added.

And as a result, the Army and the police have initiated an investigation into the incident.

“An investigation will be conducted and the law will take its course that’s what I believe. If he’s above the law, then it will be exonerated even tomorrow because there are independent witnesses. Our file may be ready by tomorrow with the traffic offence he has committed but as criminal investigations are concerned I cannot speculate,” Dr Kasiima said.

Brig Richard Kalemire the Army spokesperson said that: “We have learnt of that incident, it’s very regrettable, it’s un UPDF, we have extended our apologies to our sisters in the police and we are conducting a drive to investigation with the police and we definitely going to take a very firm action against those soldiers who misbehaved.”

“General Ambassador Kyaligonza, according to the picture we have seen, there’s nothing clearly showing that he was mishandling the police lady at least we’ve seen the two soldiers.”

“And when I turned like this is when I came to know that the one who gave me a hot slap was Brig Kyaligonza. If they were not holding me I would even fall down,” Namaganda’s statement.

This is not a first time incident that traffic officers are assaulted while on duty. It’s been recurrent and others die in the process.

Kyaligonza is a retired Maj Gen, Uganda’s Ambassador to Burundi, a Bush War Veteran, Member of the UPDF High Command, and a member of the top most organ of the ruling National Resistance Movement.