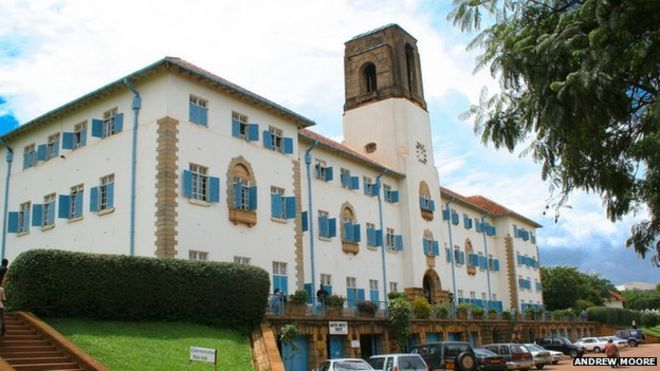 Dembe Amos, an internal auditor at the institute of public health, Mulago was on Monday thrown out by security after accessing the Assembly meeting with a gun.

This came after Mwavu’s declaration that they will not proceed with the meeting with armed member amidst them.

“Officer, one of our staff has a gun and I am requesting you to disarm him immediate or you take him out of our meeting.”

After few seconds under escort of the Officer in Charge (OC) Nickson Okello Makerere University, Dembe moved out of the meeting.

According to Mr. Okello, Dembe is a security operative who he didn’t know that was a staff at Makerere University. Adding that he’s going to instruct ISO to carry on investigations as far as his identity is concerned.

“He is a security operative only that some people are in uniform while others are in plain clothes, but all I can assure you is that his gun is lawful.”

After disarming himself, Dembe returned to the meeting.

In the meeting they resolved to continue withdraw of labour until their demands are met. MAK staff claim the University Management have totally failed to respect their leaders and this explains their protest.

This resolution was arrived at during a Monday 11 of February Joint General Assembly attended by staff, administrative and support staff Associations.

In the meeting staff claim suspension of their colleagues was a result of their duties as association heads.

These staffs were accused of indiscipline related cases.

Commenting on the matter Prof John Jean Barya, an expert in constitutional law stated that Law school is ready to stand with any staff during this industrial action who will be suspended.

College of Business and Management sciences lecturer John Bosco Oryema noted that it’s a shaming to force their way back to class when their leaders are serving illegal suspensions.

And Dr William Tayebwa, Head Department of Journalism and Communication asked Mak VC Prof Barnabas Nawangwe to honour Academic leaders’ decisions to withdraw the suspension of staff heads since his decision were unlawful.