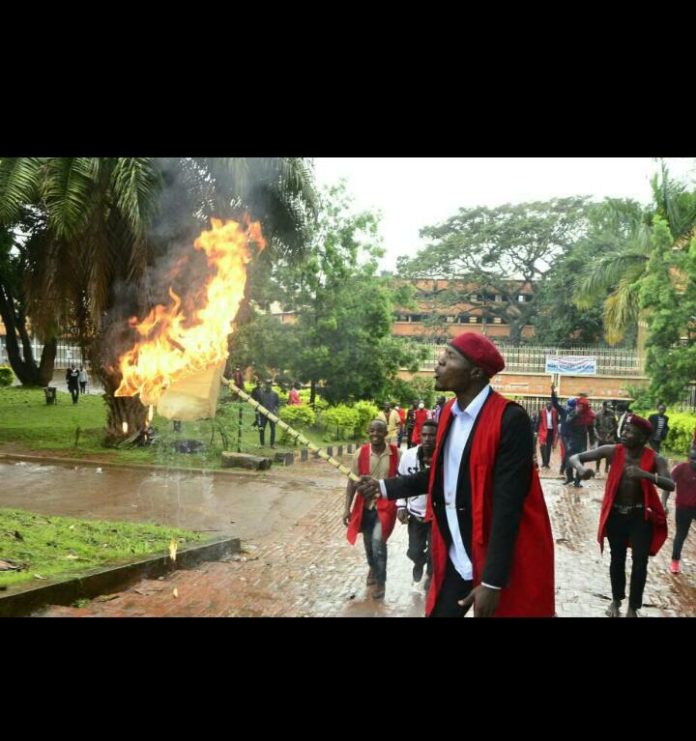 Yesterday we published a story about Makerere University strike where students staged resistance against Uganda Police over several reasons. Several students were arrested including the Guild President Salim who was brutally flogged, arrested and detained. Today at exactly 7 am, the same students dressed in red gowns shouting wee-wee again started striking and destroyed several university properties, cars blocked from moving within the university. And after the police officers started ambushing them, beating and arresting them with claims that they had no authority to go to streets.

Among the reasons why the Wandegeya based university students went wild includes the policies suggested by the University and the Makerere University Vice Chancellor Prof. Barnabas Nawangwe, these include attempt to privatize the halls where students reside, scrap off food services provided to government sponsored students, employing unscrupulous divide and rule policies like bribing and intimidating students’ leaders, outsourcing catering services among several other strong reasons.

The current situation at the Ivory tower and all around Makerere university is still unsecure. The current news coming in can confirm that Tear gas, gunshots are still rocking the entire campus most especially near Lumumba hall, Mitchel Hall and places near complex hall and the police has advised students to stay home and hostels until the situation stabilizes.

This Makerere University strike comes after few weeks close to the final examinations which are believed to start on the 30th April 2018.