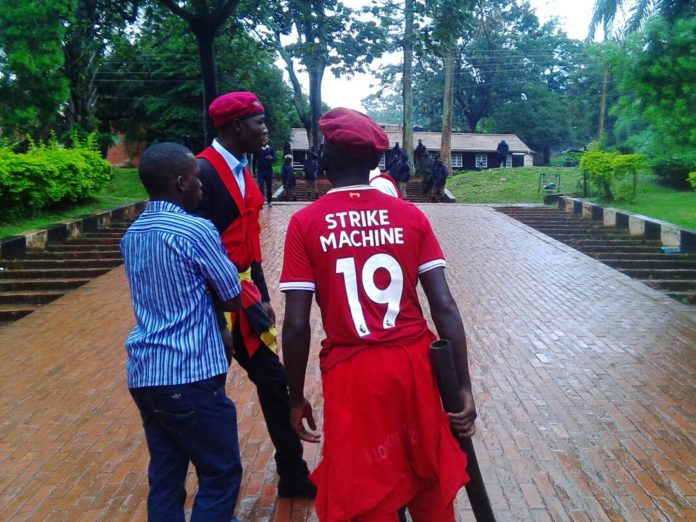 On Monday 16th Makerere University students woke up surrounded by hundreds of police officers, police trucks and several tear gas vehicles parked near their halls of residence and in the University compound after the leaked rumors that they will hold a strike challenging University policies that have been decided by the council.

Led by their current defiant Guild President Papa Were Salim, the university students dressed in their red gowns stormed all the halls of residence like Complex, Lumumba Hall, Mitchell Hall, and Mary Stuart and forced other students to join them in the so called ‘ONE WAY’ movement matching towards the main building despite the heavy deployment of Uganda Police Force.

Flash Uganda Media can confirm that among the issues that have forced Makerere University students to hit the roads includes an attempt to privatize the halls where students reside, scrap off food services provided to government sponsored students, employing unscrupulous divide and rule policies like bribing and intimidating student leaders, outsourcing catering services among several other reasons. We can reliably report in this Uganda news update that students staged a strong resistance and bullets, teargas was heard and seen around Makerere University and the nearby places.

This comes after several other policies introduced by Prof. Nawangwe, the current Vice Chancellor of the Wandegeya based university for example Scrapping off of evening classes, stopping receiving of internship money for students, rumors that no more students will be sponsored by the Government among others.

We shall keep you posted here at Flash Uganda Media.