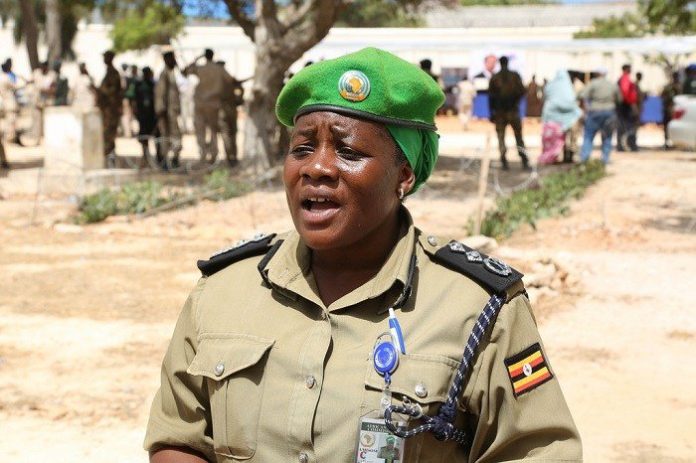 The family and friends of Christine Alaro on Tuesday the 26 of March 2019, gathered at All Saints Cathedral in Nakasero, to hold her memorial service after she vanished in the Ethiopian aircraft crash earlier in March 10, 2019 on Sunday morning.

The collision of the Boeing 737 Max 8 aircraft after the crash shortly after take-off was too much beyond expectation. According to reports they have not yet identified anybody formally out of the 157 bodies from 35 countries that were involved.

It’s said the DNA testing of the remains of the victims might take up to six months to make the final result.

Deputy Special Representative of the Chairperson of the African Union Commission to Somalia, Simon Mulongo, on Tuesday informed mourners while at All Saints Cathedral Nakasero that the DNA testing needs a lot of accomplishments.

“We have over 15000 bits of bodies which are as small as a millimetre whose DNA we have to do. If we fail to trace anything specific, we might bury them in a mass grave at the crash site.”

Alaro’s elder brother, James Okello, who was among the team sent to Ethiopia, Addis Ababa by police, to help in the identification process while offering his speech said that at the time of the crash, the remains of the air crash went deep into the soil burying everything soon after the explosion.

“The plane went down 20 meters deep into the ground after exploding.”

He says debris of the aeroplane from the crash site were the only ones that were recovered.

Okello continued to say that her sister’s death left a big gap in their family because she was a source of unity and worked hard to see that the family stayed together.

“She was a champion of peace, not only in her family but the continent at large.”

Martin Okoth Ochola, the Inspector General of Police, said Alaro’s death has left police empty and her absence is greatly felt by police.

“She was the Inspector General of Police for AMISOM and excelled in her work. We shall greatly miss her.”

AIGP Grace Akullo, the Police Director in charge of Criminal Investigations Divisions, said that they were a group of 64 officers that joined the police force in 2001, but unfortunately today two members have died including AIGP Andrew Felix Kaweesi after a gunshot few meters away from his house.

“She was a team player, donkey worker and above all, incorruptible. It is partly why she was seconded to join AMISOM.”

In addition, Akullo said that: “She was a lady of valour who served to the best of her capacity.”

Her family members and friends laid wreaths on a glass plague holding Alaro’s picture, the senior police chief during the memorial service.

Who was Christine Alaro?

Christian Alaro was the ninth member of the family of sixteen children born to Mr and Mrs Stanley and Janet Elwoku Etori of Acut village, Kalaki Sub county, Kalaki County in Kaberamaido, on the March 21, 1970.

Alaro began attending her early school at Moroto Town Council in 1976, and completed her Primary Leaving Examinations in Soroti at Swaria P/S.

Soon after her primary school, she joined high school at Tororo Girls School and later Immaculate Hearts Girls School for her Advanced level of school (A-Level).

After high school, Alaro joined Makerere University in 1993, and graduated with a Bachelor’s degree in Social Sciences, majoring in Sociology in 1996.

Alaro did not stop at a Bachelor’s degree, she continued studying a post graduate at the National University of Rwanda and graduated with a master of Arts Degree in Peace and Conflict Resolution in 2012.

In August 18, 2001, Alaro joined the police force as a cadet Assistant Superintendent of police, and by then she was married to Alex Ahimbisibwe Kamujni.

In 2004, Alaro was promoted to the rank of Superintendent of police. In this position, she was in charge of Child and Family Protection Unit of the police force before her promotion to Assistant Commissioner of Police in 2012 and later Commissioner of Police, her last rank she held in life.

By the time Alaro died, she was the acting Commissioner of Police for AMISOM, a role she took over in 2017, after joining Somalia under UN/AMISOM a foreign mission.