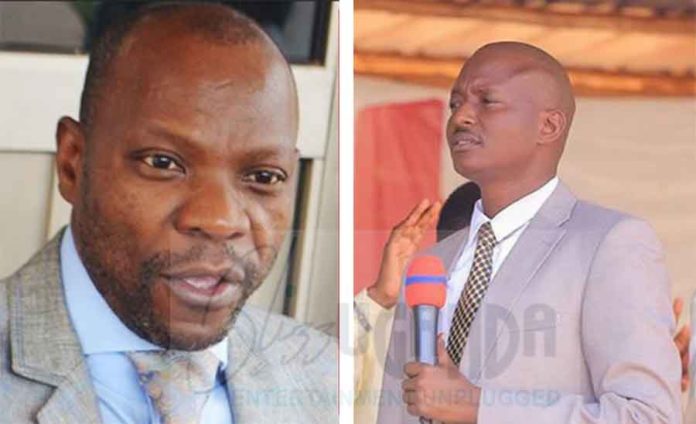 Pastor Ssenyonga says Bugingo lost track in the gospel ministry and he’s doing his own staff hiding under the church of almighty God.

He says they twist scriptures to match their personal ventures while pretending to be gospel messengers. Secondly, they don’t allow guidance of the scriptures but try much to personally cover up their weaknesses.

Ssenyonga who repeatedly referred to pastor Bugingo as “Mr” other than “pastor” clearly stated three instances that Bugingo previous did that shows that he’s a ‘false prophet’.

“Firstly he burnt bibles, something that should never be done by any professing Christian. Mr Bugingo played on his followers’ minds and mislead them into cheering him, as he burnt the word of God, and that is simply undependable.”

“Then Mr Bugingo made people throw away their wedding rings, just because he had trouble in his marriage. He came up with a scheme to discredit the wedding ring, just to justify why he had thrown away his own ring, which was a very selfish thing to do, because his marital problems were not anyone else’s marital problems.”

“The third is this latest act of coming up with a dishonest scheme to leave his wife just because he feels tired of her and wants to officially settle with his new ‘mistress’. Here he has even tried to teach his followers and the whole nation that it is okay for a man to divorce his wife for whatever reason and marry a new one they fancy.”

Continuing he said; “This is clearly against the Bible teaching which outlaws a man leaving their wife except if they have committed adultery. A true man of God can’t teach people that the way to solve their marital differences is divorcing and marrying afresh, because that’s not the Biblical teaching.

Mr Bugingo’s teaching and example is dangerous to the family structure in Uganda because people following his lead are going to forge excuses and leave their spouses, breaking the family institution in this land.”

In his further notice, Pr. Ssenyonga says Bugingo’s doings are like those of “kibwetere” and other false prophets who twist scriptures to fit their aspirations.

Pastor Ssenyonga however, argued all Pentecostal churches in Uganda to intervene in Bugingo’s matter, counsel him back to the Bible truth. And if he fails to respond positively then they will ‘black list’ him.