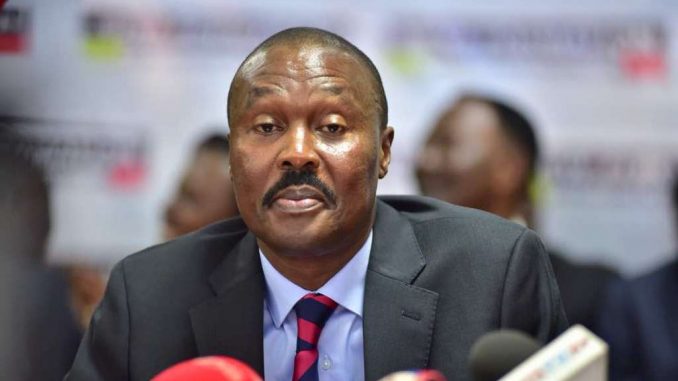 He says he has made consultations with most parties including JEEMA, that’s Justice Forum, SDP, PDP, People Power movement and DP on how to coordinate, work together for a joint goal of overthrowing president Museveni and make sure they keep their achievement of change after they meet their dream.

“As far as I am concerned, Gen Museveni is history.  The main challenges are in the post Museveni period, because we are conversant with our history for the last 52 years.

The change won’t be the first one in this country but we must examine into reasons why ever with change, the culture has always remained the same.”

“We believe in unity; we believe in values. But we need to build so that we become a country with the best governance policies,” Muntu added.

Mugisha Muntu proceeded to say that they have to sit and figure out what has blocked their way and how they can reach for the stars.

“We must focus on where we want to go, how we can get there and what has caused all others in the last 50 or more years to fail.”

Muntu relatedly, urged all political party heads to exercise honesty and integrity and transparency, stating that without the above no fulfilment can ever be achieved.

On September 27, Gen Mugisha Muntu launched a new political party that he formed after shunning FDC, the biggest opposition political party of the time under claims of incompatible deliberate misunderstandings on the party’s political goals that included bringing change in Uganda through overthrowing the regime government.

Just like Bobi Wine, Gen Muntu did not sign the coalition agreement though he attended and seem to believe in their values. And is not yet known whether the two will ever join the coalition.

However, in the same meeting other political leaders including Mike Mabike of SDP, Abed Bwanika of PDP and DP president Norbert Mao also made statements.

Mabike in his argument wants Ugandans to embrace change stating that it’s the only way of unseating president Museveni.

“How are you going to achieve the goal of chasing Museveni in 2021 without relying on change with the people of Uganda,” Mike Mabike.

While Norbert Mao in his message strongly believes with lots of confidence that this newly formed coalition ahead of 2021 presidential elections will work out.

“In future you will be able to tell your grandchildren when you are toothless, I was there, I saw them as they were planning, it was like a joke, but it swept away the dictator.”