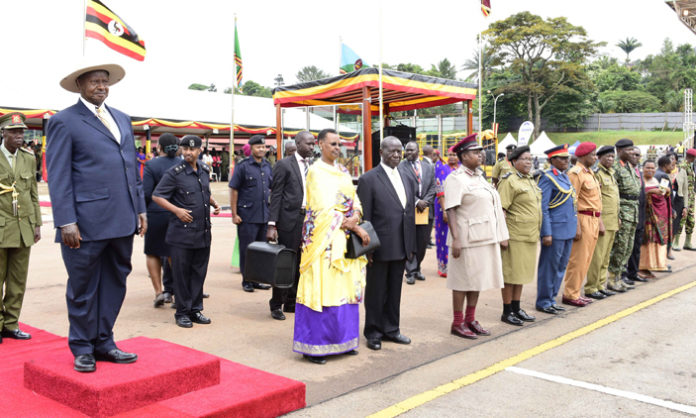 President Museveni has assured Ugandans that no person or a group of persons can destabilise Uganda, because government has capacity to frustrate their plans and ambitions.

This was in relation to the to the earlier message he made in January during the NRM Liberation Day celebrations held in Tororo that all those thinking to destabilise Uganda will not excel in their proposed plans.

“This area has been peaceful in spite of the chaos that has been going on in Congo. Which is over the border there and I told them that the peace to be maintained and nobody will disturb the peace of Uganda.”

He made the remarks while presiding over the International Women’s Day cerebrations at Rimi primary school at Bunyangabo District Tooro Sub Region on Wednesday 8, 2019.

President Museveni argued people of the Rwenzori sub region to avoid sectarianism and ethnic nationalism in politics and promote tourism since it’s the leading foreign exchange contributor for Uganda.

He also advised them to engage in better farming technics that aims at protecting the environment.

“Don’t fall for it, you may elect a leader on sectarian ground but when he is useless. Elect leaders because they are good workers. Assess their capacity to solve your problems,” President Museveni said.

“If I elect you am I going to sleep in your house? How will you solve problems of my family? Therefore, I am urging you not be loured in this politics of sectarianism,” President Museveni added.

Women including miss world Africa quiin Abenakyo were recognised at the event and awarded medals for their exceptional contribution to the country including raising Uganda on the global map.

Female members of the armed forces and civilians were awarded as well.

“Women can do what men thought they wouldn’t do, women can actually do better,” Quiin Abenakyo said.

“Women like these ones on the parade, we are all in the directorate for example in the police, we have women in criminal investigation and we can investigate better like the way men can investigate. We have women in the traffic they can do better,” one of the security women present at the celebrations stated.

President Museveni however, argued the people in the Rwenzori Sub Region to embrace tourism and not look at it as a sector promoted at the expense of Agriculture.

“The conservation area is much smaller as compared to the area we are using for crops and cows and yet this small area is bringing in more money than the coffee for instance parks like Queen Elizabeth National Park.”

This was related to the president’s twitter post of February 17, 2019, where he said: “from the amazing Gorillas in Bwindi in western Uganda to the breath taking Sipi falls in eastern; any tourist would be spoilt for choice. Importantly it is the warmth of Ugandans that would make any tourist feel at home here. Uganda is the best tourist destination.”

He further encouraged the Rwenzori Region people to focus on commercial agriculture to generate wealth into their house hold for self-reliance. And that includes fish farming, setting up factories and mining.

He added that Fort Portal Bushenyi roads are to be constructed and every fund needed is available.

President Museveni further argued the people of the area to adopt electrification of each and every area by using solar energy to supplement grid electricity. Museveni says one of the resident told him that Kabonera area has electricity yet it has not reached the district headquarters.

Theft and security in the area

President Museveni told people of the area to use police dogs to trace out thieves in the area as a remedy to rampant theft in the area.

“But I have been told there’s rampant theft here, with people stealing crops like vanilla, bananas.  Make use of police dogs, says  President Museveni.

He says, he was told that there’s a canine unit in Fort Portal but they have never used the dogs to trace thieves in the area, because they lack transport means. And as a result he argued district leaders to ensure that transport is always available to help people whenever need arises.

President Museveni continued to state that road block is not a solution to any crime committed, but instead installing security cameras on the road is the best way of tracking criminals like in Kampala.

And very soon the technology will be extended to other areas outside Kampala, as he referred to 2018 speech he made before parliament regarding security saying that;

“We plan to install electronic monitors in cars, and motorcycles but at the cost of the owner.”

“The thinking here is: you can track a garden thieve from the garden to the road using a dog, and then on the road using both security cameras and electronic monitors,” President Museveni said.