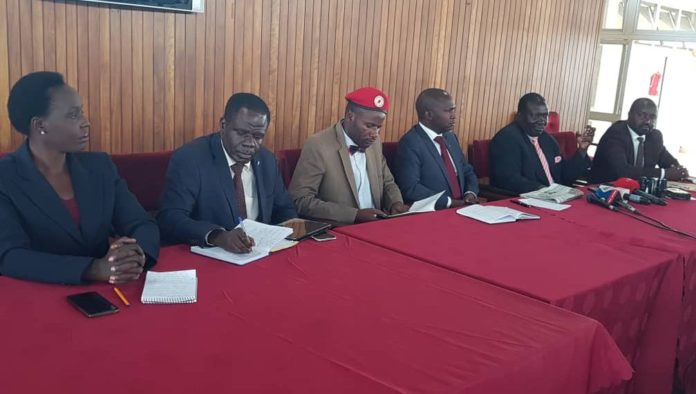 Theodore Ssekikubo, MP Lwemiyaga County, the lead member of this group said they are going to seek legal advice in courts of law as regards to Museveni’s sole candidature and life presidency move. Adding that CEC’s decision is selfish, misguided and illegal.

The Central Executive Committee of the ruling National Resistance Movement made resolutions including president Museveni’s sole candidature and lining behind contestants in NRM ‘s primaries scheduled for 2020. As they concluded the five-day retreat at Chobe Resort Hotel in Nwoya District.

According to Ssekikubo article 13 of the NRM Constitution only mandates CEC to guide NRM candidates seeking elections to NEC. He now wonders where CEC obtained powers to nominate and close certain posts in the party.

He further said NRM Constitution requires one to apply for the position of his interest but not just appointing them.

“When did president Museveni put in his application to stand for 2021? CEC is jumping the gun. Why is CEC rushing to endorse Museveni yet they’re only to endorse?” Hon Ssekikubo wondering.

He says CEC’s tenure is five years according to NRM party constitution which expires by 2021. So they have no authority to make recommendations.

“Where are they getting the mandate to appoint and play game of Museveni that he stands alone? We call upon CEC to withdraw their recommendation. It’s selfish, misguided and doesn’t go by aspiration of Ugandans. We may consider making a Constitution petition whether it is in conformity with NRM Constitution.”

Ssekikubo argues that if NRM party doesn’t have internal democracy? How can they promise to lead Ugandans with democracy?

“Allow yourself to be challenged to show yours’re popular. I have never known Museveni for being a coward, if he has now become a coward tell us?” He asked.

This section of MP continued to say that stopping other eligible contestants against president Museveni is illegal as far as the party constitution is concerned and an indication of power greed, selfishness and love for money because money circulated during the five-day retreat.

“Why should this position be ring fenced, then it should have been provided in party Constitution. This is no longer a party but a company with shareholders, I condemn it being evil, wicked and diabolical in nature,” John Nambeshe Manjiya County MP asserted.

And Gaffa Mbwatekamwa said that CEC’s meeting was so embarrassing because he believed the meeting in Nwoya District was meant to discuss the upcoming middle income status.

“Museveni chairs CEC he sat and endorsed himself, is there a difference from Amin who declared himself as life president? I hear the opposition cry about democracy, if us the NRM members inside can’t even smell democracy from inside, what about you from outside?” He asked.

However, this section of MPs in a press briefing on Thursday the 21 of February at parliament now, wants Central Executive Committee (CEC) to withdraw their decision of sole candidature with immediate effect of else seek court’s correction on the issue.

It’s said this section of rebel MPs had plans to challenge the incumbent in the upcoming NRM primaries which is now stepped on.

They also attacked their fellow NRM legislators accusing them of keeping quiet as the party’s Constitution is overturned.