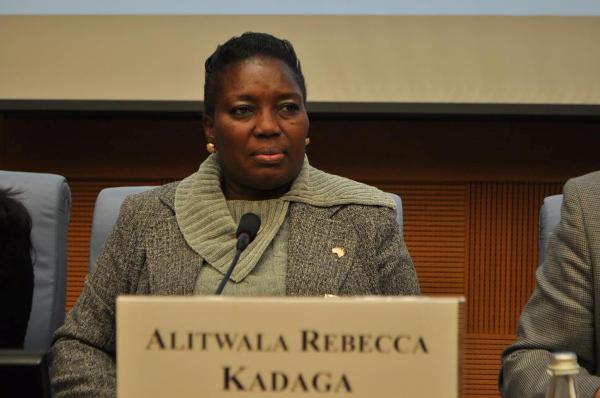 Parliament has considered earlier claims by a native doctor Damiano Akuze to have propelled speaker Rebecca Kadaga to political prominence 29 years ago as defamatory piece of information.

Ms Jane Kibirige the Clerk to parliament trashed Akuze’s statement presented in a law suit saying that, he cast a spell on Kadaga which propelled her to current national prominence.

Kibirige says Ms Kadaga has never been an EALA member, stating that her current position as the Speaker of Parliament of Uganda was not as a result of witchcraft but her hard work.

Kibirige adds that in 1996, Kadaga was appointed minister seven years ever since her election to parliament.

“Therefore, Mr Akuze’s claim that he catapulted her to the post of Minister within a flash should be treated with contempt it deserves,” Kibirige’s statement posted on parliament Twitter handle @parliament_Ug.

In addition, Kibirige said “the implication of Akuze’s claim is that he bewitched the entire parliament, the presidency and the whole country to elect Ms Kadaga as Speaker. We hope and pray that Akuze’s comical and fraudulent allegations will be dismissed by court.”

She continued to say that “the speaker, a vanguard in the fight for good governance, the right of the weak and poor: and emancipation of the girl-child on the national and international stage; will remain steadfast in serving the country.”

Kibiriga said this claim is a malicious damage to the Speaker.

“She has got to her current station in life through hard work and a God given talent of harnessing the good in others. We appeal to all Ugandans to work towards building a more just society.”

Kadaga is yet to file her defence and have not yet commented on the claim.

Damiano Akuza a native doctor, who on January 28 filed a law suit against Kadaga before Jinja High Court for a bleach of contract. Akuza says he wants Kadaga to pay him the remaining Ushs205 million.

He contends that Kadaga approached him at his shrine, seeking help to attain a successful political career on September 1, 1990.

Akuza claims he cast a spell on Kadaga that propelled her to her current national prominence.

“The defendant (Speaker Kadaga) requested the plaintiff to work on her so that she would be given a big job in government and also be driven in a convoy like a president.

The defendant did not have money to pay, the plaintiff accepted to work on her on condition that she would pay the plaintiff as soon as she got the job.”

Now Akuza alleges that Kadaga only paid him 1m and refused to pay the remaining Ush204.5m since 1990.