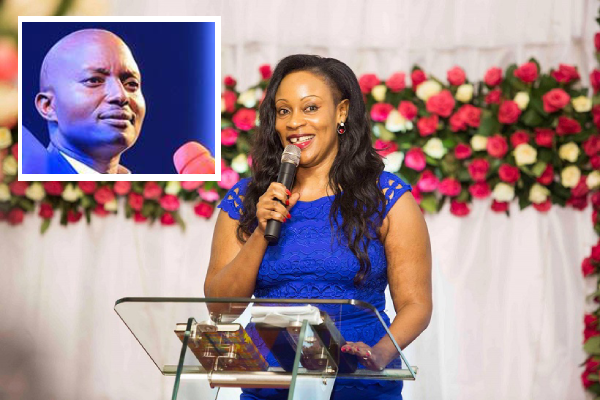 On Wednesday 1 of May 2019, Jessica Kayanja stood firm and defended Mrs Bugingo who clearly came out and said that Bugingo is attempting to end their marriage after 29 years of existence, to replace her with a young woman.

In her message, Mrs Kayanja launched a prayer session for Bugingo’s wife. She related Mrs Bugingo’s situation to the Biblical Esther “who prevailed and stayed in the palace of the King despite her many foes.”

“May the seed that Mrs Teddy Bugingo has sown for 29 years in this marriage rise up and crush the head of the Serpent,” Mrs Kayanja prayed.

“I call upon every mother, married woman, child borne of a mother, everyone out there that upholds Holy Matrimony to join the Girl Power Team and I in prayer! The Hebrew woman will not leave her marriage. HADASSAH MUST STAY!!!!”

Mrs Kayanja’s involvement in Bugingo’s marriage woes hit a rock upon getting into Bugingo’s ears. He says Mrs Kayanja is “arrogant” and asked her to get off her family issues last night while appearing on Salt Media on the ‘Emisingi show’.

Bugingo’s argument was that: Mrs Kayanja was getting into waters whose depth she doesn’t know, and crossing her limits.

“Never involve yourself in issues you don’t understand with ignorance. I have never sat you down to tell my family issues, a symbol which shows that we have nothing in common though (we are) not enemies, we have never stepped in your church, so if Teddy came to you then advise her wisely,” Bugingo fired back at Mrs Kayanja.

He angrily continued to state that he had never intervened in their marriage issues. Bugingo however, said comparing Teddy to the Biblical Esther was totally a mess.

According to Bugingo his wife should be related to Queen Vasti, who lost King Ahasuerus, her husband to Esther because that’s who she is.

“Esther would not have existed if there was no foolish woman. This is how Esther came in. there has to be a foolish woman, legally married, loved cared for, given everything but took everything for granted,” he noted.

Earlier on on the 28 of April 2019, in a Sunday service sermon, Pr. Bugingo accused his wife Teddy Bugingo and daughter Doreen Gift Bugingo of attempting to steal and sell the church land which is located at Makerere Kikoni close to Bwaise in Kawempe division where House of Prayer Ministries sits.