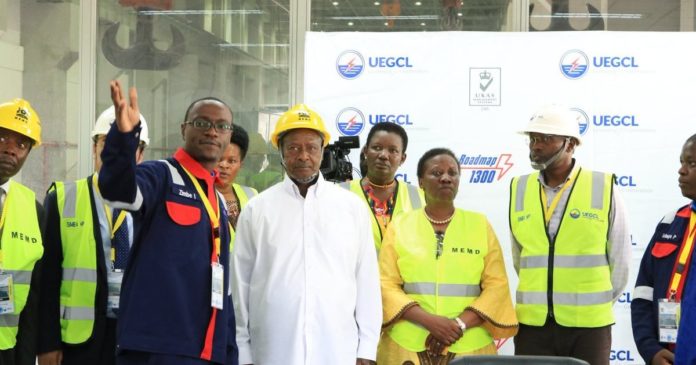 183mw have been added to the National grid, as president Yoweri Kaguta Museveni unveils Isimba power Dam earlier on Thursday 21 of March 2019, in Kayunga District.

Isimba Power Dam costed 1.4 trillion shillings, and constructed by a China company in a period of 47 months. This fulfilled Museveni’s statement made in 2013, to construct hydropower dams in Hoima and Isimba in Kayunga District to lower electricity cost for manufacturers.

The four turbine dam each churning out 47.5mw is believed to be the saviour as it will lower the electricity rates to five cent or even one cent dollar.

During commissioning amidst heavy rains, president Museveni commended the Chinese government for rendering Uganda a soft loan of $571 billion that facilitated the power plant construction.

“Not only here at Isimba, they have also supported us in Karuma. The government of China and the people of China are reliable partners of Uganda and of Africa.”

Head Isimba Dam construction revealed that the Dam has a lifespan of about 100years.

Isimba is the second power dam to be commissioned by Uganda since independence.