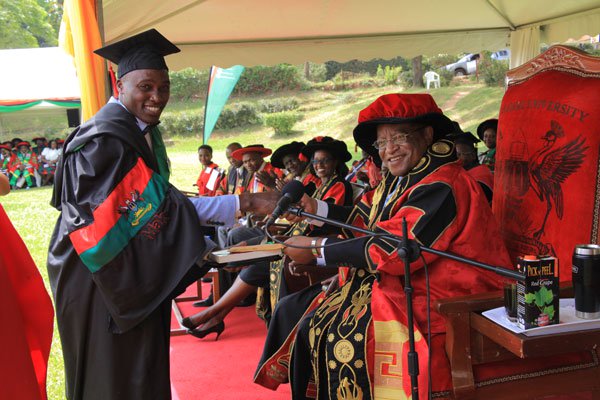 Makerere University Chancellor has argued government to end pampering foreign investors and extend more favours to its citizens. According to Prof Ezra Suruma the too much favour Uganda government has to foreign investors has sustained unemployment in the country.
Suruma in this case was addressing student’s treat on the wide spread
unemployment levels in the country. He says it’s government role to create jobs to its citizens and it should be its first priority if all the country is to develop but not putting all its trust on foreigners.
“I do not believe that there is any serious government in the world that expect that foreigners will solve its employment problems. Foreigners can only contribute, but they cannot substitute domestic investment and enterprise.”
Speaking at the 69 th graduation ceremony at the University Main Campus Makerere he said that government should focus more on supporting local investors other than lobbing foreigners who are incapable of eradicating unemployment in Uganda but instead pursue their own interests.
“The second and first growing economy in the world is a planned economy. The idea that government withdraws from investing and supporting domestic enterprises and that foreign investment will lead to full employment is in my humble opinion, a cruel joke,” Prof Suruma outlined.
He however, requested government to finance local investors in order for them to improve on their performance and compete favourably on both local and international markets.

He adds that the excellent performance of Chinese in business clearly indicates that local investors need government aid.
Relatedly, he said that if at all government wants to achieve positive results in the case of job creation in Uganda it should first review its privatisation policies noting that the biggest percentage in fighting unemployment should be taken up by government.
And in the case of oil production soon kicking off in Uganda, Suruma argued government to consider Ugandans first in order to reduce on foreign dependence as regards to full employment in the country.