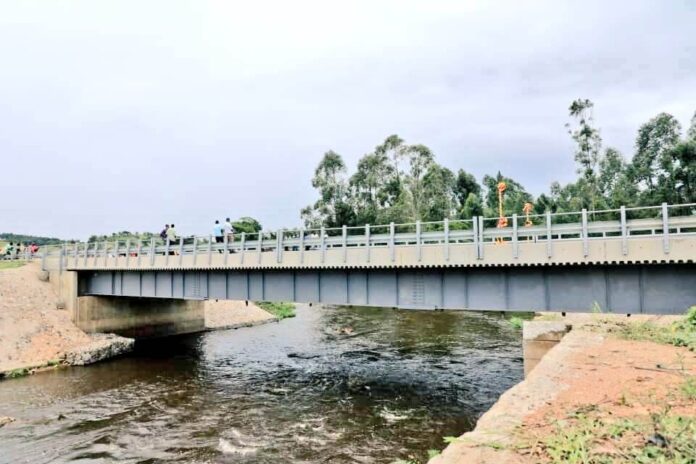 The Mpondwe River in Kasese District is one of the most popular tourist attractions, as well as the town of Mpondwe at the border with the Democratic Republic of Congo (DRC).

River Mpondwe is among the major tourist attractions located in the Rwenzori Mountains in Kasese District. There’s also a town by the same name Mpondwe located at the border with the Democratic Republic of the Congo (DRC).

Bwera is a nearby settlement to the immediate east of the River Mpondwe also known as a border crossing.

By car, Mpondwe is around 55.5 kilometers (34 miles) southwest of Kasese, the district administrative center. The closest major city, Fort Portal, is located around 131 kilometers (81 miles) to the southwest of here.

Bwera is roughly 424 kilometers (263 miles) away from Kampala, Uganda’s largest city and capital.

Between 2015 and 2020, UBOS estimated that Mpondwe’s yearly population growth rate would be 2.34 percent on average.

Tourist activities in the area

River Mpondwe is only a small portion of the many interesting places to see in Kasese and the surrounding areas. If you plan on visiting the area, here are some tourist activities to include on your to-do list.

After visiting River Mpondwe, tourists can go on a balloon safari in Queen Elizabeth National Park which isn’t far. Think about flying above a variety of animals, including lions, elephants, antelopes, hippos, and more.

If one has the means, hot air balloon safaris in Queen Elizabeth National Park are an absolute must-do activity because of the area’s breathtaking natural splendor, which includes the rift valley floor, escarpments, gorges of the Kyambura, rift valley lakes, and snow-capped mountains of Rwenzori.

River Mpondwe offers good waters for tourists looking to cool off on a hot day. Inexperienced swimmers can also seat by the showers and enjoy the cool breeze and views in the area.

The best game drives are scheduled on several routes across Mountain Rwenzori National Park because it is home to over 70 different species of mammals.

Numerous animals, including Rothschild’s giraffe, Uganda kob, Cape buffalo, warthogs, waterbucks, elephants, and hartebeest, can be observed along the road.

Tourists can have nature walks around river Mpondwe while enjoying the views around, like that of Mountain Rwenzori on the horizon.

Additionally, it’s a great location to mix and mingle with the locals who come to the river to fetch water. The vegetation around also provides great birding grounds to watch and photograph some of the rarest birds found in Uganda.

The DRC-Uganda border crossing at Mpondwe is one of the three busiest border crossings in the world. Bunagana and Goli, both in Kisoro District, are the other two.

Considering the number of imports and exports, the town is the busiest border crossing between the two countries.

The Uganda Ministry of Health owns the public hospital Bwera General Hospital. Patients from the neighboring Democratic Republic of the Congo as well as the adjacent sub-counties in the Kasese District are served by it.

As of May 2016, it is the only hospital in Kasese District that is owned by the government. The hospital has a 100-bed capacity but frequently admits as many as 300 patients.

The mountain’s conservation area, the Rwenzori national park, spans the districts of Kabarole, Kasese, and Bundibudyo and is almost 1000 square kilometers in size.

It is a UNESCO World Heritage Site. It encompasses the majority of the mountain’s center and eastern half and is renowned for its stunning plant life, which is complemented by waterfalls, glaciers, and a variety of other unusual highland plants.

The park has been described as one of the world’s most attractive Alpine locations because of its glaciers, snowfields, and waterfalls.

The scenery on Rwenzori Mountain is very beautiful. There is vast grassland and so much wildlife to see, all within the river Mpondwe area. You’ll see giraffes, antelopes, elephants, and more.

The best site to watch lions, especially the Tree Climbing lions, is in Queen Elizabeth National Park, Uganda’s most well-known savanna park, which makes it the ideal location for a Uganda Wildlife Safari.

It takes pride in having the greatest range of habitats in the nation, including lakes, savannah grasslands, woodlands, and wetlands, which are home to the greatest number of large mammals.

One important tourist attraction near river Mpondwe is the Kyambura Game Reserve adjacent to the Queen Elizabeth National Park which contains the Kyambura Gorge. Numerous species of fauna call it home.

Savanna surrounds the location, which is a significant supply of water for many species, but the gorge is known for having a lot of primate life.

Only in Kyambura can one witness habituated chimpanzees in QEPA. Red-tailed monkeys, black-and-white colobus, baboons, and vervet monkeys are examples of other primates.

In addition, the park is renowned for the variety of bird species it supports, such as many falcons, blue-headed bee-eaters, and African finfoots.

Lake Bunyonyi is a body of water in the Kabale District and about 7 kilometers (4.3 mi) west of Kabale town.

It is the largest and highest of three small lakes (the others being Lake Mutanda and Lake Mulehe) in the Kigizi highlands that are part of the Nile basin. Travelers who visit Mpondwe can also visit Lale Bunyonyi.

Places to stay near River Mpondwe

There are so many places to stay near River Mpondwe and they include, Kikorongo Safari Lodge, Engiri Game Lodge, and Campsite, Ihamba Lakeside Safari Lodge, Elephant Hab Lodge, Sandton Hotel Kasese, Njovu Park Lodge, Rwenzori International Hotel among many others.

Kasese, home to the River Mpondwe and a famous border crossing point is one of the places you should visit in western Uganda.

The journey will offer so many other tourist attractions in the area and if your budget allows, you may spend a week touring all the places we’ve listed in this article and more.