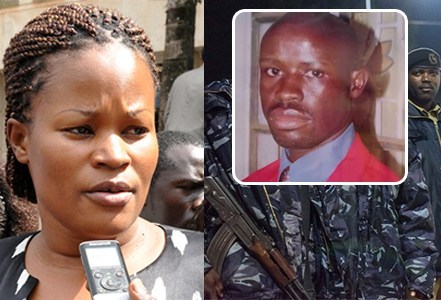 Ronald Ssebulime’s family has filed a request to Martin Okoth Ochola, the Inspector General of Police, to allow them carry on a protest against police’s inability to apprehend ICT State Minister Idah Nantaba.

The swift turn of event follows Nantaba’s statement she aired out at her house in Ndeeba village, Kayunga District before her guests that she hosted on her thanks giving service on Saturday 18th of May 2019.

In her message, Nantaba said that Ssebulime was sent to end her life.

“I know Ssebulime had come to kill me and I insist on that. Kirumira and many others said they would be killed but it all came to pass without anyone caring,” Nantaba revealed.

“Why has it taken more than a month to know who ordered the police to kill Ssebulime! Is he above the law? Why can’t they reveal him?”

Ssebulime’s family in their letter copied to the Director of Public Prosecution (DPP) condemned Nantaba’s false accusations’ against the late Ssebulime while police look on.

“We are concerned about the reckless and insensitive statement by the minister which are provocative and heartless by imputing criminality on the deceased as a cover up of her roles leading to the murder of Ssebulime,” the letter stated.

In the other demands, Ssebulime’s family wants to demonstrate against failure by the DPP to prosecute Nantaba and the police officer over the murder.

Ssebulime’s family letter through Muwadda and Company Advocates showed that they are concerned as regards to police’s conduct in the investigations.

“The police have failed or ignored to apprehend Nantaba over her role in the murder, having provided wrong information. The family is concerned that police has only produced one police officer and fully aided and abetted him in shooting Ssebulime dead,” the family said.

Ssebulime was arrested, handcuffed and after a short while shot dead by one of police officers from Nagalama police station who were on a 999 patrol vehicle, following commands from unknown individual who made a phone call to this officer.

This comes after Nantaba grew suspicious and reported to police that strange people were trailing her on a motor bike with likely intentions of ending her life.

But later on, it was discovered that Ssebulime who was a single father of four was unarmed as the Minister had reported to police.

He had lost his way to his children’s school and was probably trying to trace his way to the school.

It was also discovered that Ssebulime was a single father of four children, he lost his wife sometime back and the bag he had at the time of the incident, carried food which he was taking to his school children.