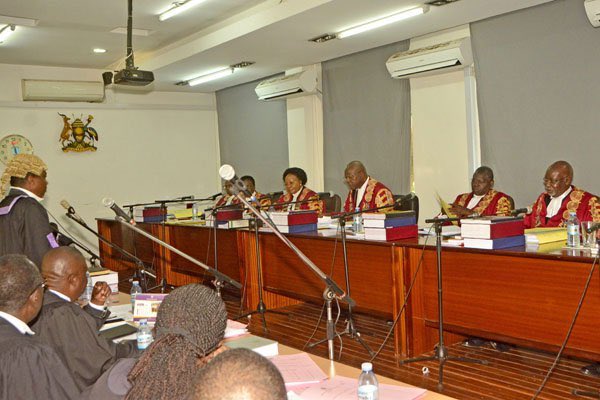 The Supreme Court has released a statement that the age limit appeal judgement filed earlier by different parties including Lawyer Mabirizi will be ready this week.

On Monday afternoon, the Supreme Court registrar said that the judgement will be ready on Thursday 18th April 2019 and it will be presented to the concerned parties and the public at large.

“Take notice that the judgement of this appeal has been fixed for the 18th day of April 2019 at 10am. If no appearance is made by yourself, your pleader or by someone by law authorised to act for you. The judgement will be delivered in your absence,” a statement by the Deputy Registrar Supreme Court.

This notice was given out to all concerned parties in this appeal case.

He wanted an immediate answer for the delays in proceedings and court to command Justice Katureebe as the administrative leader Judiciary and the Supreme Court to present the judgement with immediate effect.

“The Uganda Judicial Code of ethics requires that where a judgement is reserved, it should be delivered within 60days, unless for good reason, it is not possible to do so,” Mabirizi said in his application note.

He however, continued to say that: “The sixty days from 16 January 2019, expired on 17 March 2019, with neither judgement delivered nor any reason advanced for the failure to do so with in the prescribed time.”

In Mabirizi’s argument he wanted Court to give clear reasons why it failed to deliver the judgement within 60days time as the law states. But Court did not give any reason for the delay.

“The Deputy registrar responded to the applicant’s letter, without giving any reason for the delay, but merely stating that the judgement is being processed. The applicant insists that the above letter never contained any reason for failure to deliver judgement within the mandatory sixty days and falls short of giving any such reasons.”

Constitution Court that sat in Mbale in a 4:1 decision in 2018, ruled in favour of those who wanted the presidential age limit off the Constitution.

It justified the removal of the presidential age limit clauses off the constitution by legislature.

This in turn instigated the Uganda law society, opposition MPs led by Winnie Kiiza and lawyer Mabirizi to challenge the decision before the Uganda Supreme Court.

In January 2019, after the last session of this case was heard, Chief Justice, Bart Katureebe said that Supreme Court will deliver the judgement on age limit appeal on notice.

But after a long wait Mabirizi, who is among the three petitioners approached Chief Justice seeking an immediate deliverance of the judgement.