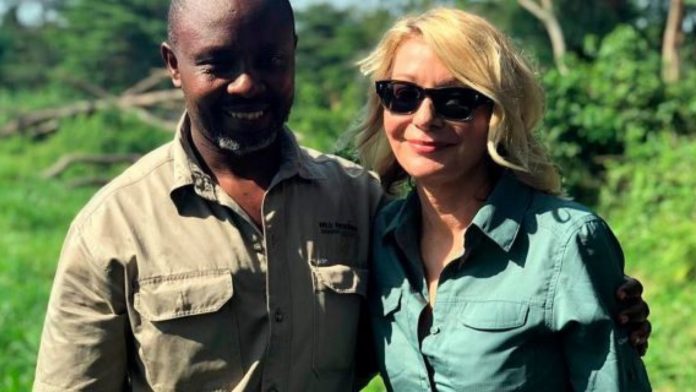 Police have arrested some suspects believed to be kidnappers of the American tourist, Kimberly Sue Endicott and her tour guide Jean Paul Mirenge Remezo, yesterday Tuesday 9, 2019.

Fred Enanga, the police spokesperson, released a statement indicating two persons arrested in Kanungu District and have been transported to Kampala for more interrogation from police.

“I can confirm that there were some arrests but I am yet to get default. I will brief you when I get the information.”

Kimberly Sue Endicott and her tour guide Jean Paul Mirenge’s suspected kidnappers under arrest, has been identified as Hakim and Kwarishiima.

According to Enanga, the duo was arrested following a tracking device that was fixed inside the ransom money that were delivered to the kidnappers before Endicott the tourist and the tour guide Jean Paul Mirenge, were finally released.

The kidnappers demanded a ransom of $500,000 (shs1.8bn), using the victim’s cell phone but after negotiations they agreed to take $30,000 (shs112m). according to security reports released on Monday.

But refused to divulge any further information about the two suspected criminals.

Enanga says these security forces pressured the kidnappers a lot, alongside threats which made them drop the hostages and took off.

But Godfrey Kiwanda SSuubi, the State Minister for Tourism emerged and confirmed that the Kidnappers were paid a ransom of $30,000 (ush112m) before setting free the captives.

Kiwanda adds; government could not take in the risk of losing these two lives because a life matters a lot and also it had to save and protect the name Uganda.

However, unconfirmed reports indicate that the kidnappers asked the money to be delivered to them by a woman. And it’s said a woman sat on a boda boda and rode towards Democratic Republic of Congo. Midway, she was asked to stop and there came another boda from Congo searched the woman thoroughly well before picking the money.

And the two were brought back to safety.

The US news outlets reported that the accomplishment of the mission was aided by the US Military that includes; Intelligence, Surveillance and reconnaissance assets and Liaison officers.

On Monday, Endicott was then handed over to the US embassy in Kampala by Martin Okoth Ochola, Inspector General of Police.

Donald Trump, the US president, on Monday through tweeter ordered Uganda authorities to do their best in getting the kidnappers arrested and prosecuted in courts of law without fail.

“Uganda must find the kidnappers of the American tourist and guide before people will feel safe in going there. Bring them to justice openly and quickly.”