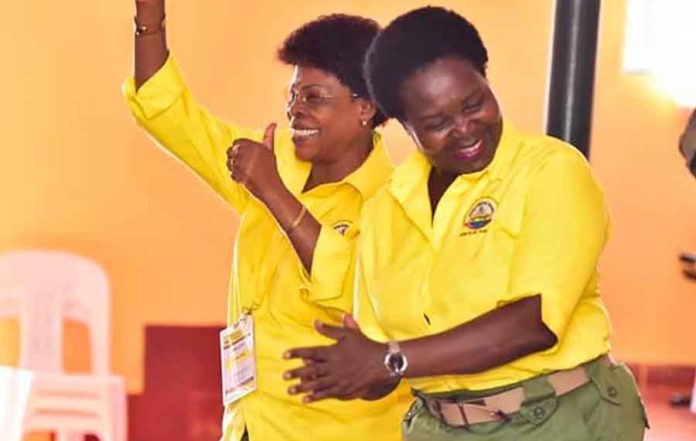 Betty Kamya the UFA president was appointed by president Yoweri Kaguta Museveni, on the 6th of June 2016 to serve as the Minister for Kampala, and since then she has been serving in the NRM government up to date.

Ever since her appointment into Office, Kamya has been protecting president Museveni in all angles and a strong critic to opposition where she doubles and neglecting her roles as UFA president.

However, this week, Museveni sealed off his endorsement to be the sole presidential candidate in 2021 vote, by the NRM MPs, which caused excitement among legislator in the caucus and Betty Kamya the UFA president was among the celebrants who celebrated Museveni success in Kyankwanzi in this line.

Addressing journalists on Tuesday in Kampala, UFA party spokesperson, Baker Byayi Ssenyonga, said that Kamya has for long neglected her duties as the president UFA and in turn embarked on selling UFA party to NRM.

“She is a political prostitute and vendor who has tried to sell the Uganda Federal Alliance to president Museveni yet it contravenes our party Constitution. We cannot allow a person who preaches something during the day and does the opposite at night to be our president.”

Byayi says after them holding several consultative meetings with the National Executive Committee, Central Executive and district leaderships for the party, they resolved to drop Kamya as their president. Reason being her views now violates those of UFA.

“We cannot entertain Betty Kamya going on drumming support for Museveni whom the party wants removed from power. That circus must stop and this can only be fulfilled by disposing her as the Uganda Federal Alliance president. We have never been part of her alliance with NRM.”

“We have had so many political prostitutes in Uganda’s opposition parties and its high time we do away with them. Kamya is one them. We can no longer trust her to lead our party,” Byayi added.

Byayi says UFA party is arranging a National delegates conference to elect other representatives. They however, said they will make sure Kamya’s life fails.

“She can go ahead and stand for any leadership positions but wherever she stands, Uganda Federal Alliance will ensure we put a candidate against her.”

We failed to get Kamya’s comment because she was still in Kyankwanzi at the NRM caucus meeting.