On the 3rd of June every year is Uganda Martyrs day and it’s a big day for Christians in Uganda especially the Catholics and Anglicans. Many people gather in Namugongo to celebrate the day in remembering the Uganda martyrs who were killed on orders of Kabaka Mwanga II who was the king of Buganda by then.

This day attracts many people from different countries such as Kenya, Tanzania, Rwanda, U.S.A, DR Congo and so many others.

Recently there has been an Ebola outbreak in DR Congo and several cases were reported which even called for assistance from international organisations such as the Red cross and the United Nations.

The latest news coming to our news desk indicate that Uganda is receiving Pilgrims from DR Congo to come and celebrate the Uganda Martyrs with the rest of the world in Namugongo.

Therefore due to the recent Ebola outbreak the ministry of health said it is using all the required efforts to prevent any possible spread of Ebola epidemic to Ugandans, the prevention is done through screening of travelers at the border and Entebbe international airport.

Pilgrims from Democratic Republic of Congo who are coming in Uganda for Martyrs Day, 3rd June, 2018 are being screened for any signs of Ebola.

“We have intensified surveillance. We have instructed leaders in selected districts to reactivate district task forces in preparation for any possible out break” state minister for health Sarah Opedi said.

She said the screening targets all passengers who had a history of travel not less than 21days to Congo. 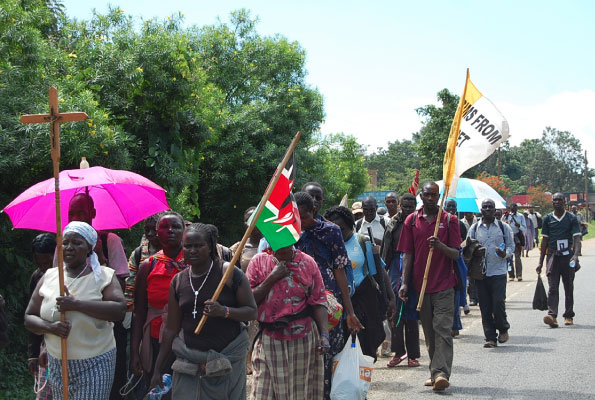 A private medical center at Entebbe airport is also equipped to provide counselling and clinical screening of all suspects. She told the press.

Has there been any case of Ebola outbreak in Uganda?

The state minister explained that there has not been any Ebola outbreak in Uganda, there has instead been a case of Crimean-Congo haemorrhagic fever from Nkoko Sub County in Bugangaizi County, Kakumiro district, which shows the same signs like Ebola but less vicious.

Crimean-Congo is got from animals to humans, the infected show signs of high fever, vomiting but no internal and external bleeding has it is with Ebola.

Crimean-Congo killed a 35year old male from Nkoko sub-county who was referred to Mubende Regional Hospital, he was recommended to the facility’s isolation room where he was treated. Unfortunately, he didn’t survive that night. A source told us.

The public was called to use soap when washing their hands after contacts with animals, and use of protective wears while slaughtering animals to prevent the transmission of animal diseases to humans, according to Dr. Henry Mwebesa the Ag. Director General health services.