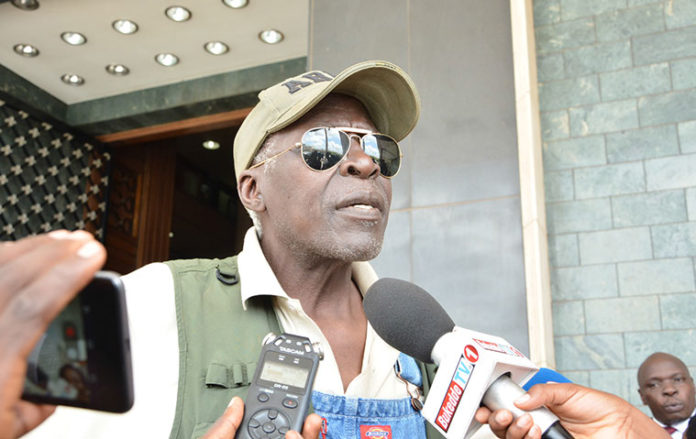 Rtd Maj Gen Kasirye Gwanga on Tuesday night at around 10:45pm allegedly shot and tore a tyre of artiste Catherine Kusasira’s car after a fight, following accusations that the vehicle occupants were playing inconveniencing loud music.

The trouble began when Gwanga’s children who were buying fries in Makindye asked Kusasira’s aides to place down the volume of the music in their (Kusasira aides) premio car registration number UAY 083Y and they refused.

They then invited their fathers’ intervention and then the shooting followed.

However, on Wednesday, Kasirye Gwanga confirmed shooting Kusasira’s car tyre an act he does not regret whatsoever.

Gwanga who described Kusasira as “stupid looking” states that when he tried to inquire about the matter, Kusasira instead threw insults at him.

“Kusasaira and her drunkards wanted shs300m from my son. They thought they were going to get the money. I tell you when I was called, I got out of the bed and reached there,” Kasisrye stating.

“They attacked my American son who had checked out to buy some stuff. Kusasira and a man, presumably her husband was very drunk and the man attempted to beat up my son, yet my son’s size is above that of Uganda. He is an American. He had to ring me.”

Gwanga continued to narrate what had happened saying that; “I was home but I had to drive and found them in Makindye around posh. I came in because I wanted to find out what exactly had happened. When I asked, that mad woman came out and started shouting at me. I looked at that “stupid looking woman” and they told me she was Kusasira. Who cares about Kusasira? Kasirye Gwanga? Not me.”

In addition, the controversial ex-soldier said that the more he tried to cool this singer down the more she shouted, asking who they think they are (Gwanga’s).

“From there, I shot at her car tyre. You don’t mess up with a general and drive a way, so now its news around. What is the hullabaloo?” Gwanga asked with ease.

Kasirye Gwanga proceeded to throw shameful comments at Kusasira relating her body texture to a toad.

“Tell her that she looks like a toad, but are those the looks of your musicians you always praise? Let her go to gym to streamline, her figure is really bad.”

The 67-year-old ex-soldier, also the former Mubende district chairperson in the same way accused Kusasira of identifying herself as his wife two year ago.

After, he said that he filed a case against her at Ben Kiwanuka street police post. Gwanga later on informed Kusasira “never to joke with people like Kasirye Gwanga,” after marking her “nuisance.”

Gwanga’s controversies started way back in 2007, when Maj. Gen. Gwanga then Brigadier, slapped a traffic police officer who had blocked him from using Entebbe road and drove away.

And though the police officer reported the case, no action against him was taken despites the promises made by the then inspector of police Gen Kale Kayihura to take action.

After the incidence Ssekitoleko filed a case against Gwanga at old Kampala police station and Mbabazi vowed to contact the army to make inquiries on Gwanga’s action again nothing was done by the police or army.

December 24, 2009, Christmas eve Gwanga attacked a Pentecostal Christians gathering who were praying in a playground close to Makindye Magistrate Court, accusing them of making noise to the nearby residents.

He fired up bullets which dispersed the believers together with their pastor. Until today no inquiries were made.

In July 19, 2010, while in Entebbe Gwanga is said to have knocked dead Elijah Oyako an 11-year-old child. A case of reckless driving was charged against him but he has never appeared in Court or even reported himself.

Even when warrant of arrest was issued by Entebbe Magistrate Court, he was never arrested but later said in an interview with Daily monitor that he is in touch with the deceased family to settle the case out of Court.

In May 2011, while at Total petrol station in Kibuye it’s alleged that he released his dogs on a civilian. But when reported to police Gwanga claimed that the man wanted to steal from his car and the dog had to bite him. No charge was again filed.

In April 2012, Mubende district Mr Ezra Sigiranda, Mr Ano Gafa and Mr Vincent Bagonza accused Gwanga of assault but until today he has never been summoned.

August 1, 2013, Gwanga blocked police from evicting his home in Makindye Division although with a Court order. They tried the second time and again failed.

UPDF intervened in the matter but all were in vain after Gwanga warned the former Chief of Defences Gen Katumba Wamala to stay away from his property. And today Gwanga is still living on the land.

And August 2017, he burnt down a tractor on land he claimed to be his but no felony was charged against him.