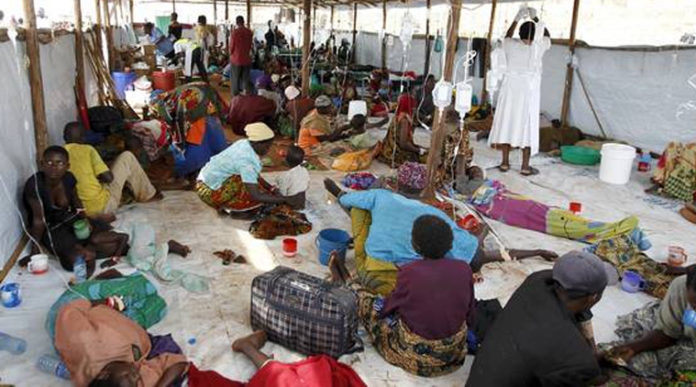 A deadly disease Cholera has emerged in Kampala with 17 patients admitted currently to Nagulu Hospital isolation unit. The director clinical services at the ministry of health Dr. Charles Olaro confirmed the outbreak noting Lubowa, Bukasa and Namuwongo as the most affected areas.

According to Ministry of Health two deaths have been taken down out of the 17 cases reported since Friday last week.

“six lives have been affected, two children below 5 years and those between 7-10 years are also two while those above 10 years are thirteen,” Dr. Olaro explaining.

Doctor Emanuel Mbatibwe the director Nagulu hospital confirmed reception of 7 patients at the isolation unit in Nagulu Hospital and have responded well to treatment.

He adds that no new cases have so far been recorded at a moment.

“They are 7 in number and ever since they arrived at the hospital they have attended to them comfortably and also responded well to treatment.

They have received the appropriate treatment and are now stable. In fact, we expect to discharge some of them after we confirm that they are now Cholera free.”

Cholera signs include; severe vomiting, abdominal pain and diarrhoea characterised by excessive loss of water. Symptoms can manifest after 5 hours of infection and if not attended to one dies within 24hrs.

The affected persons are treated with strong anti-bio tics and oral rehydration salt to restore the lost water in the body since the greatest part of human body consists of 75% water.

While in Kampala the last Cholera outbreak was in April 2018.

To avoid being a victim to the disease one is urged to use clean toilets or latrines and also wash hands after the visit because Cholera is got after digesting human faeces.