Who is Prophet Samuel Kakande? Flash Uganda Media looks at his biography, son, family, church ministry, facts, father, and wife of the founder of Synagogue Church of All Nations.

Samuel Kakande is a Ugandan self-proclaimed prophet, farmer and a businessman. He is the founder of Synagogue Church of All Nations former Holy Church of Christ “New Chapter” based in Mulago Kubiri, Kampala City.

The activity was said to be affecting the environment negatively and his land titles were cancelled in 2018.

During the COVID-19 lockdown, Prophet Kakande donated three tons of maize flour to the underprivileged persons in Mpigi District, through Aqua World, a company he owns.

The donation was accompanied by 10 million shillings which were received by the area RDC, Rose Byabasaija and the District Chairperson, Peter Clever Mutuluza at the district headquarters.

The donation was the first relief support to the district taskforce since the lockdown was announced in March 2020, which had lasted for weeks.

Kakande is popularly known for his miracle rice and magical water; He has a chain of churches, located in different regions, and has mentored several pastors like Bro Ronnie Makabai of ETM Church International among others.

Kakande is a commercial farmer, dealing in Maize, rice growing, Fish farming among other farming activities

Prophet Samuel Kakande has been criticized on several occasions for his spectacular miracles by his fellow pastors, who claim that he is a false prophet and a devil worshipper.

One of them is Pastor Jackson Senyonga of Christian Life Church Bwaise who said that Christians who fellowship in churches like that of Kakande, Aloysius Bugingo and Augustine Yiga, Bro Ronnie Makabai, Pr. Elvis Mbonye among others, sold their souls to the devil.

“I have done my research on these pastors and have evidence of what I am talking about. I am not bad mouthing these pastors but speaking the truth. No man who does such acts deserves to be called a man of God.”

However, in response, Kakande says his Ministry’s theme, is to try to take people out of poverty and other social-economic issues.

“With this concern of the increasing congregation, with a burden of poverty, jobless, shelter problems while others are orphans, the Kakande Ministries has thought of a way to assist the masses to improve on their daily income and to secure jobs for the people through sustainable agriculture.”

Male says he witnessed a lot of evils committed in the name of Jesus of Prophet Obiri Yeboah the late.

Male narrates he performs miracles and torment his followers using Obiri’s dead spirit. He as well witnessed marriages and families being torn apart and healthy people manipulated into relationships with known AIDs sufferers who Kakande claimed to have prayed for and healed in the name of Jesus.

He claimed Prophet Kakande buys off people and ferries them to the church to give false testimonies and fake miracles at a fee with some earning up to over 500,000 for their dramatic acts.

Synagogue Church of All Nations

Prophet Samuel Kakande is the lead pastor of the Synagogue Church of All Nations based in Mulago Kubiri, in Kampala City founded in 1978 by Prophet John Obiri Yeboah the late, from Ghana.

At Synagogue there is a range of holy retail merchandise sold to believers, including holy rice he harvests from his farmland based in Masindi District.

In 2017, Prophet Kakande ran mad and was admitted to a mental clinic. It was claimed that Kakande suffered mental illness as a result of his all-powerful evil snake’s mysterious death. The snake was his God that offered him powers to manipulate followers.

Prophet Kakande has been disowned and criticized by fellow pastors and Christians over his satanic doings in church. Scary stories have been told about him by the victims of his services.

In 2006 Kakande was disowned by the umbrella body of Pentecostal churches in Uganda saying he failed to cope with the Born-Again code of conduct. For that matter, he is not accountable to any religious body in the country.

The controversial pastor, who had wedded five times in ten years, has always been believed by the followers to be an all-powerful man of God, who even cures ailments including HIV/AIDS.

Kakande is known for his blessed water which people lines up for at a fee, charged according to the size of the container and holy rice as he claims also obtained at a few. He charges a kilogram of rice at 50,000Ush.

Sam Kakande, son to the Synagogue Church of All Nations prophet, Samuel Kakande, rebuked his Dad and joined the Seventh Day Adventist Church (SDA), saying he can no longer live a life of lies, stage-managed Miracles, witchcraft and endless evil sacrifices.

Kakande revealed this at Namboole Stadium during the annual corporate prayer day which was hosted by the Seventh Day Adventist Church on 14 Jan 2018.

Sam Kakande confessed that he fears being sacrificed that is why he is joining the SDA church where they don’t preach riches, luck and fortune.

He was surprised by the way the SDA church reads the Bible which is different from the way his father Prophet Kakande reads it.

Prophet Samuel Kakande married five times in 10 years. After his separation with Royce of which they have two children, Kakande married a Congolese woman, Margaret Emily Pendeza at Culte Francophone Cathedral, Butembo, Bunia in the DRC in 1997.

Misfortune then befell Kakande after the Congolese wife failed to conceive accusing Kakande of firing blanks.

In a desperate search for a kid, Kakande even considered encroaching on the sacred territory of Emily’s younger sister they lived within Muyenga. This was too much for Emily to bear and she fled. 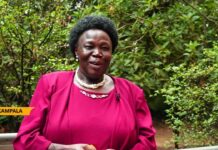 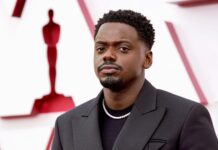 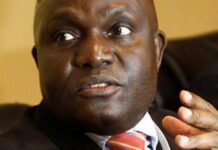