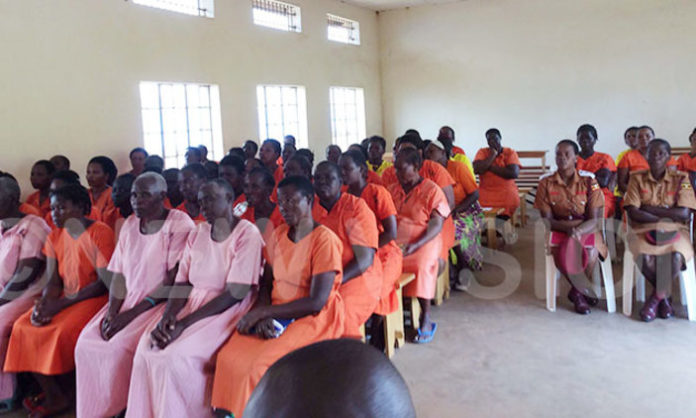 The prerogative of mercy is a system that authorizes the head of state to utilize the powers entrusted to him to release prisoners. It comes after the Judiciary completes its duties. The president heads the prerogative of mercy committee, attorney general as the chairperson and six prominent persons of the public make up this executive committee. However, the president has no powers during prosecution of any criminal offence according to the law.

Article 121of the 1995 constitution via the advisory committee of prerogative of mercy mandates the head of state to use the powers entrusted to him to release prisoners.

They asked the minister of Internal Affairs Gen. Jeje Odongo to pass on their appeal to the president.

Besides, Odongo advised prisoners as he shared his prison experience with them. He asked them to abide by the prison rules and regulations to help them reform and transform into responsible citizens in their country and communities respectively.

This followed his testimony as a prisoner in the early 1990s where he told them that, while in prison he realized his mistakes which helped him to reform and “turned out into a responsible person. “That’s why I am able to hold a ministerial post”.

According to prisons 145 prisoners are on death row and six of them are females. Last executions in Luzira were made in 1999, yet Uganda’s court still declare death sentence to criminals.

Inmates appealed to the president to pardon the convicted prisoners and others on minister of Justice and constitution Affairs orders waiting to be released, they say many of them have waited for long.

Accordingly, these inmates stated that “we have reformed and if given the opportunity of forgiveness, we shall be able to live responsible lives”, inmates speaking to minister Odongo.

They added that they have gone through various rehabilitation programs and as for now they have reformed.

President Yoweri Kaguta Museveni has so far carried out presidential pardons since 2009 which includes;

In 2009 Museveni he forgave Abdullah Nasser former governor of the central province during Amin’s regime that was on death row, in Luzira upper prison and in the same year he pardoned Chris Lwakasisi, former Minister in Obote’s government.

While Sharma Kooky was released on march 7th/ 03/2012 after 12 years in jail. Kooky was accused of murdering his wife Renu Joshi after being subjected to torture by her husband.

Anthony Okwonga aged 80 was sentenced to death after murdering Veneranda Pinyangaon and pardoned on 2nd April 2016.