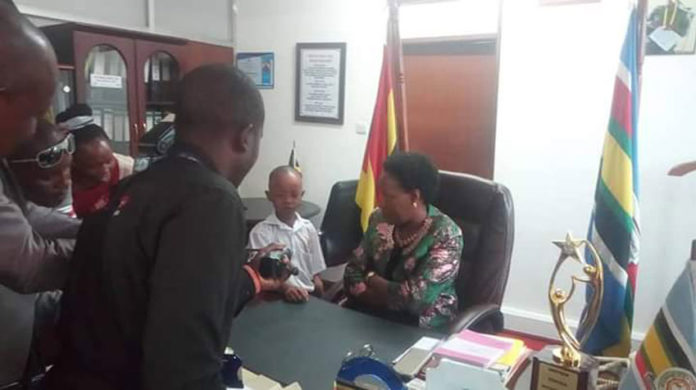 Nakiwala in her statement during the meeting said that Fresh Kid needs school, and in the process vowed to render her support as regard to this Juvenile Rapper’s education.

The two parties met following recent threats aired out by Minister Nakiwala to arrest the seven-year-old rapper and his management team if he dares continue with stage performances shunning education.

Nakiwala had commanded Fresh Kid to stop singing and return to school including passing on strange rules with threats of imprisonment to whoever attends Fresh Kids concerts, his managers and event organisers.

Including subjecting him to a drug test to establish his mental health state.

She had said that Fresh Kid would only be allowed to sing if at all his management and family clearly tables a work plan indicating the time Fresh Kid spends at School, sleep and his music shows.

Few days later, after Minister Nakiwala posed a ban on Fresh Kid, he unveiled a song entitled ‘Bambi’ asking the Minister to allow him proceed and build his music career, arguing that he has a dream of becoming a great artiste just like others who began singing when they are still Juveniles.

Fresh Kid added that his music has positively changed his life and that of his parents, so it’s enough ground laid for the minister to have mercy and accept his plea.

After this interaction, Nakiwala offered a ‘yes’ to Fresh Kid and promised to render her support to Fresh Kid’s education on how to balance class time and his musical performances through his managers.

Fresh Kid was also instructed to perform only during weekends and return his termly report to Minister Nakiwala at every end of school term to monitor his school performances.

This meeting as well followed the Monday statements that rose from the members of parliament that sit on the parliament Forum for Youth and Children, warning Nakiwala to stop suffocating the Fresh Kid’s Talent because of education.

These MPs included western Uganda Youth Representative Mwine Mpaka, MP Kasambya County, Gaffa Mbwatekamwa who told the Minister to focus on her business of getting children off the street, led by the MP Ann Adeke for National Youth Affairs.