After being pelted with bottles for the second time on 17 January 2020 while on stage at Spice Diana’s concert at Freedom City, Big Eye became unconscious and rushed to the nearest clinic on the Entebbe road to save his life.

Yesterday, in an interview with singer Ibrahim Mayanja, alias Big Eye, after his recovery, a lot has been discussed, and here’s what you need to know.

Big Eye – I don’t regret because I am doing the right thing I feel at heart. I don’t want to pretend and I don’t want to look fake. Even though people will pelt me with bottles, I don’t want to be fake…you get that, I will persist on the truth because that’s when my heart is comfortable. Yes, it’s hard for me because I no longer work, singing is my job which sustains me and my family. But if I decide to make others happy when my heart isn’t okay with it, instead I will be hurting myself.

Don’t you think it’s high time you denounced politics and concentrate on your music career?

Big Eye – I’m not on politics and I’ve never talked about politics while on stage but it’s these people who create the situation by pelting me with bottles. Majority of fans become happy whenever I step on stage because I’m one of the best entertainers in Uganda. But up to now, I ‘m wondering and that’s why I even got high blood pressure to the extent of being taken to hospital, it was too much to bear because I saw very many of my fans who were clogged from enjoying my entertainment. I was so embarrassed because I can take a year-plus without falling sick but due to that incident, I became unconscious ending up in the hospital. But I will not lose hope…Yeah.

We heard that you won’t be performing on any event up to 2021, then how will you survive since music is your job

Big Eye – According to the situation, my management decided that I should first leave the stage while waiting for the situation to calm down. Because on 1 January 2020 I was assaulted with bottles while on stage and it’s the same thing that has occurred in the same month on 17. On that basis, my management agreed that I should step off stage awhile for they’re also worried, this time it was bottled but next time it might be something else. I’ll only be singing on those events organized by the NRM party.

If you’re not on the list of artists who will perform on NRM events, how will you survive?

Big Eye – God knows. Yes, I know it’s going to be hard for me because singing is my only job but all in all, life is more valuable. I give everything to God. I call upon this good government to do something because this is an abuse of my rights. 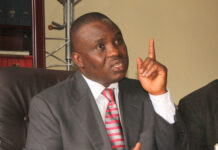 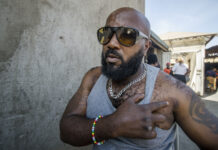