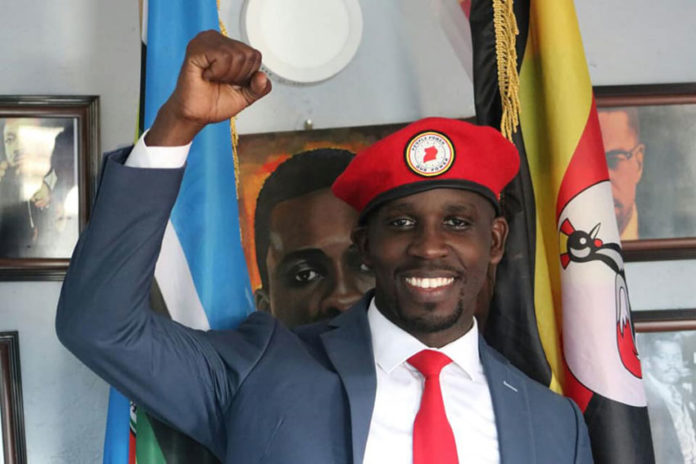 Joel Ssenyonyi is a Ugandan politician, former Journalist and talk show host at Nations Media Group (NTV), a broadcaster at Power FM as well as a Statistician by profession.

Ssenjonyi is a 32-year-old man born on December 20, 1986, at Mulago Hospital to Mr Joseph Basekezi, a Muruuli from Nakasongola and Mrs Dorothy Nankunda, from Rwampala in western Uganda.

He’s a broadcaster who does what he loves and today he’s best known to be the new People Power spokesperson.

He is a Muruuli by tribe from Nakasongola who grew up in Kyengera, a Kampala City suburb. Ssenyonyi is the firstborn to a family of four (4), his mother was the official wife, the wedded wife.

Ssenyonyi is the first born to a family of four (4), his mother was the official wife, the wedded wife.

However, Ssenyonyi’s father was a hardworking man who had other wives with children, that includes three (3) boys and one (1) girl each with a mother.

Together they are in touch! because when they grew up they realised that they have to be one.

Eventually, many of Ssenyonyi’s stepbrothers and stepsisters were brought to their house. His mother asked his father to bring them. She said she will raise the children.

So, in that case, they grew up together, but unfortunately, their parents divorced and they had to leave their Kyengera home, moved elsewhere and began to live a real life.

Ssenyonyi, his mother, the three siblings and the maid they came with from Kyengera started living in a one-roomed house.

“it was a kitchen! In that room were six of us.” It was a real struggle for their mother to raise them “I remember my mother going without food some nights so we (children) could eat the little that was there.”

“I got beatings from mother, the mother can beat! I guess that is why we love them” and “at school they used to write talkative, noise-makers and all that.

In his S.6 vacation, Ssenyonyi came across a UBC advert searching for news anchors.

He applied with nothing, he didn’t have even the senior six results, but he was competing with people having diplomas, degrees and masters.

Ssenyonyi believed in himself that he can, they did the interviews and crossed over to the next round, like that.

“I remember the final round and these people were asking how old are you? I am like, ‘I am 19’. They say, ‘you are 19! Are you at the campus or what? I say ‘I am in S.6 vacation’. My results are not out yet. They looked at each other… but they liked what I offered. They chose two of us: myself and a lady, to begin working.”

Ssenyonyi remained committed to his journalism career which he started at 19 years old, even though he enrolled for a science course after his S.6 result was released and that was a bachelor of Science in Business Statistics at Makerere University.

After some time Ssenyonyi left UBC and joined NTV Uganda and started working as a News Anchor on NTV Tonight news hour programme and a talk show host, where he worked for five years.

Early in May 2019, Ssenyonyi resigned from his journalism career which he started way back in 2006 at UBC Station and ended it at the Serena based station NTV Uganda.

“Joel Ssenyonyi is an intelligent young Ugandan, accomplished professional, and devoted patriot. He is a man of unquestionable integrity with an impeccable record in speaking out against injustice, bad governance and the many evils that bedevil our society,”

“It gives me great pleasure to see intelligent young Ugandans join this struggle to liberate our country from oppression and dictatorship. Thank you comrade, for accepting this responsibility, which I know is a sacrifice.”

Ssenyonyi says he joined politics because he thought of making contributions to his country in a different version for the goodness of our country. From business reporter to politics, Ssenyonyi says he had always an eye for politics.

Ssenyonyi is a Born Again who attends prayers at Watoto Church usually in Ntinda and Watoto Central in Kampala. “I got Born Again when I was six years old in my P.1. along the way, I slipped a little bit, not gravely, though. I recommitted my life when I was 16 in S.6 and got serious with the Lord, and I still am.”

Ssenyonyi confesses that he’s a virgin who’s waiting until marriage. His first confession was in 2017 at Watoto church.

“I’m a virgin, some people might think that maybe I do not have opportunities or that my things don’t function, of opportunities, they are immense. In fact, I was about to report a police case, about the “things” God blessed me with, they are working. However, just because they work doesn’t mean I go all over putting them in every place.”

Ssenyonyi loves his phone because he does most of his activities on his phone that includes reading the Bible wherever he is because it’s uploaded on his phone, People Power activities such as coordination.

He’s also a metrosexual, so much concerned about his appearance that includes fashion, smartness and grooming, gadgets guy and loves sports activities.