The Karamojong are resorting to re-arming themselves to protect their cattle and lives against cattle raiders from Turkana in Kenya and Toposa people of South Sudan.

Kotido District residence in Karamoja Sub-Region informed the Parliamentary Committee on Government Assurance and Implementations that government failure to construct the 125-kilometre road stretching from Kenya to Nakapirimol, Kaleng at Natulotulo is aiding cattle raids in the region.

Kaps Fungaroo, the Chairperson Parliamentary Committee on Government Assurance and Implementations said the rearming process by the Karamoja people is as a result of security and the poor state of roads that have limited UPDF’s access to the area.

“We see that the issue of guns is coming back, insecurity is coming back. Raiders coming from Kenya armed, the Turkana come and raid our people of Karamoja, people of Uganda here and people are now left defensibly,” Fungaroo said.

“People are saying we gave our guns with the promise that the UPDF will protect us. But now when the raiders come and raid away our cows, the UPDF is not able to protect them effectively because the network of roads, the security roads which would enable the UPDF to move has not

Moses Bildad Adome, Jie County legislator, Kotido District, said President Museveni has consistently failed to remit his promises to construct security and trade routes, which has fueled cattle raids in Karamoja from the Turkana of Kenya and Toposa of South Sudan.

“Immediately after disarming them, he (President Museveni) promised Karamojongs total protection of lives and property. That if any Turkana or any Sudanese, any foreign person comes and invades the Karamojong with guns they will be dealt with. Now apparently there are a lot of Tu

Col Okolong, Brigade Commander Karamoja confirmed reports of rearmed Karamojongs particularly among the Jie, Mapiniko and other tribes in the Karamoja Sub-Region to counter raid the Turkana and the Toposa cattle rustlers from the two neighbouring countries who are still armed.

Residents of Nakapirimol Manyatta (village), the biggest Manyatta in East and Central Africa said they surrendered their guns after the government committed to providing security for their lives and properties.

The said the first lady, Janet Kataha Museveni promised total peace and security for Karamoja region which has been. Unfortunately between last year and this year, insecurity emerged again.

Residents said the first lady as well promised to give them some animals under the restocking programs, but nothing was done until today.

Following the matter, Members of Parliament on the Committee of Government Assurances and Implementations cautioned government against breaking its promises.

They said the government should consider prioritizing the matter because funds for implementation are available. 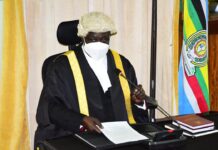 Oulanyah: Bills Not Signed in the 10th Parliament Must Be Re-Tabled

Fasting in the Bible: 10 Examples From the New and Old...