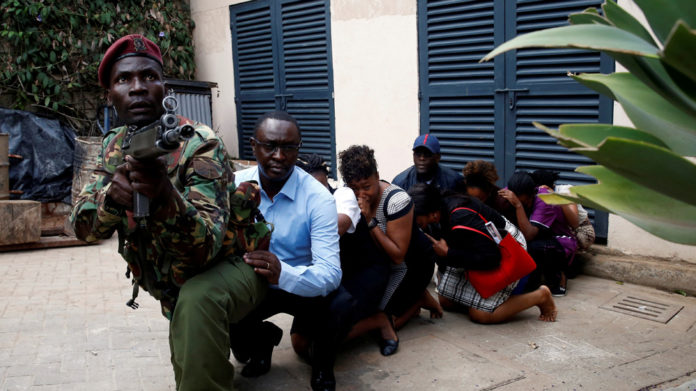 At least 21 people were confirmed dead by Kenya government when Al shabab stormed a luxury hotel compound in Kenya’s capital Nairobi located along Nairobi Riverside drive.
Hundreds of people were forced to flee the attack at DusitD2 hotel complex on Tuesday. The attack left 28 persons injured who are currently in hospitals.
And according to Kenya Red Cross society, 19 people are still missing.
The attack which triggered a 19-hour security operation has been claimed by the Somali based Islamist group, the Qaeda-linked Somali group.

President Uhuru said the blockade ended with five jihadist attackers
eliminated and vowed to seek justice for Kenyans.
“We are a country governed by laws, rules and regulations, a country that embraces peaceful existence, we believe in these values even in the face of adversity. We are a nation that never forgets those who hurt our children.”
And also promised to follow up every individual who gave in a helping hand to these heartless men in executing this unnecessary bloodshed to Kenyans.
“We shall seek out every person that was involved in funding, planning and execution of this heinous act, we will pursue them wherever they will be and hold them to account.”
According to AFP report, after the raid two people were arrested and are believed to be linked to the Somali based group.

Kenya has in many occasions suffered in the hands of the Al Qaeda linked Somali group ever since it’s Army joined the fight against jihadist group in October 2011 more than any of the 6 African countries that has sent troops to an African Union Force in Somalia.
In 2013, the Qaeda-linked Somali group attacked Nairobi’s luxury shopping mall Westage and killed 67 innocent civilians.
While on April 2, 2015, Garissa University was attacked which is located in eastern Kenya leaving 148 people dead mostly students.
And now the Tuesday’s violence arrived 3 days after Al-Shabab extremists stormed a Kenyan military base in Somalia leaving many dead.
Despite, many years of unnecessary blood shed, the Kenya-Somali boarder has since been penetrable allowing easy access of the deadly groups of people into Kenya as per the UN panel of experts.