On Saturday 5th, October, 2019 in a fully packed courtroom in his defence against the accusation, Mowzey Radio murder suspect Troy said that while hanging out at the DeBar, together with his group, Mowzey Radio came and poured wine on the group members and eventually began insulting the owner of the DeBar, a hang out in Entebbe, George Egesa.

Then Egesa responding to the attack pushed the table and attempted to fight back at Radio but he and another only identified as Hassan intervened, only to calm down the situation.

“George pushed the table which had drinks and tried to attack Radio but was restrained by myself and Hassan. We told him that it was not worth to fight Mowzey Radio,” Wamala informed Court.

Mowzey Radio murder suspect Troy in the court proceedings presided over by Justice Jane Abodo added that other people joined them on the round table as a result of the fight that had emerged.

While David Ebanget common name Washington who is among the nine witnesses presented by the prosecution was standing by the wall side, only watching what was going on.

“in the due process Mowzey Radio started fighting with everyone who came near him; maybe he thought they were all his enemies. he kept his guard up trying to fight.”

In his further explanations, Mowzey Radio murder suspect Wamala said Radio was then held and pushed out of the De Bar by some gentle he did not identify.

Accordingly, Egesa was also held by Hassan Muwonge, De Bar supervisor, a woman named Agnes, De Bar waitress and Pamera Musiimire, who was in the company of Radio, to intercept any more fights between the two men.

Wamala adds that he did not hit Mowzey, but he was trying to rescue him from the men who were beating him up, but he was overpowered by the men who pushed him onto the floor.

And when he got up, he proceeded with the call he had received from the O.C Katabi Police, Station because they had issues to discuss with him.

“I didn’t follow them as they were taking him out. I instead moved out after receiving a call from the O.C Katabi police station, because the place was noisy. As I stepped out, I found Radio fighting with two gentlemen in the corridor. I tried to intervene to stop the fight,” Wamala informed the court.

“I held one of the gentlemen, but I was overpowered and found myself on the ground. When I stood up, they were still fighting with Radio who was already down. I lost interest in trying to stop the fight and moved on. I got a Boda-Boda and called back the OC Katabi, because I had an appointment with him,” Wamala further stated.

The State Prosecutor was then asked to cross-examine Wamala after he was asked if at all he had any more additions to his defence statement.

In his additional statement, Wamala denied beating, fighting and lifting Radio, the Goodlyf crew member and threw him down.

“The only thing I did that day during the bar brawl was trying to stop the fight. I didn’t beat anyone, I didn’t fight, I didn’t lift anyone like they said I lifted the deceased and threw him down. I don’t remember touching him.”

Meanwhile, the State Prosecutor has so far presented nine witnesses in this trial case, including Ebanget, best known as Producer Washington and Pamela Musimire who were present on a fateful day.

Mowzey Radio died on February 1, 2018, at Case Hospital after sustaining serious head injuries that emerged after a fight he was involved at the DeBar, a hangout located in Entebbe on January 22, 2018.

And Wamala arrest happened on the 4th of February shortly after Radio’s death in Kyengera, a Kampala suburb where he had taken refuge. 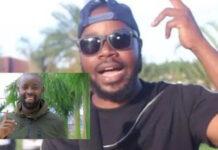 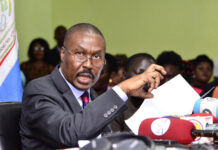