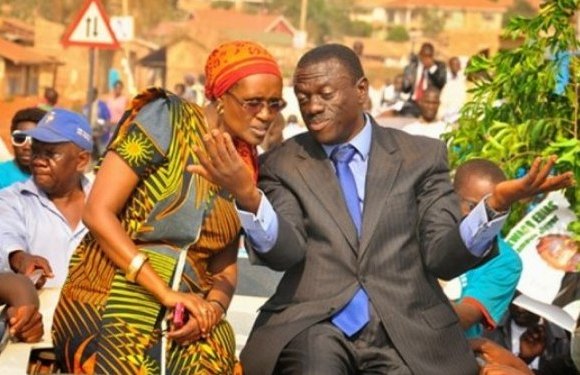 Reactions continue to streamline in, over the pronouncement made by the former FDC president and self-proclaimed leader of the People’s Government on Thursday.

On Friday Dr Kiiza Besigye named himself the People’s President and inaugurated members (cabinet) in what he called People’s National Assembly whom he says are going to work with him to fulfil what he calls TUBALEMESE campaign.

A campaign aimed at unseating president Yoweri Kaguta Museveni and his cabinet whom Besigye claim stole his election, and is now fraudulently occupying the presidential seat.

Interestingly some of those expected to be part of the People’s Assembly only had about their appointments in the media.

“The Constitution of our government therefore, we have the different shades of political opinions and formations and we shall continue to have more,” Besigye statement during the inauguration ceremony.

But some members who constitute Besigye’s National Assembly are MPs who voted against the lifting of age cap in the Constitution who claim they were not consulted, before appointing them. Stating that they got to know everything in the news and they did not attend the ceremony.

“I am highly doubtful whether this can be a replica of Venezuela or a replica of what has happened in Kenya. Whether this can be may be somehow it could be a Luwero. Without use of arms, even when they use arms they also formed and constituted a government which Obote actually dismissed,” Hon John Baptist Nabeshe analysing the matter.

“Instead what we see here, he is compromising the opposition, weakening it further and sponsoring the internal weaknesses and rifts that are in the opposition through using money being tangled to them or even power, where people meet under their umbrella of darkness” Nabeshe added.

These legislators were joined by other political players from the opposition including the Democratic Party that says they are yet to be convinced to join the team.

“I don’t think that I can be conscripted into an organisation where my consent has not been sort. Yes, I may have a stand that I do not like the idea in which government want to force us into accepting the Constitutional Amendment. One, of Article 26 of the Constitution that of life presidency and followed by that of taxing Ugandans on the matters of Mobile Money services. Even if I voted no the way I did, that’s not enough ground for somebody to conscript me on to his own thoughts,”Kasiano wadri MP Arua Municipality (ind) said.

The set cabinet also betrays some of the key ideologies that the FDC has campaigned against like criticising huge size of cabinet and advocating for a lean cabinet to minimise public expenditure.

But the cabinet named so far has more than 50 members,picturing what will happen if the FDC established a regime.

According to their president Dr Besigye more ministers are yet to be appointed. And now the question arising state that why now after two years’ silence.

“I think the Mob cabinet by Dr Besigye does not add much to his struggle for politics. I think that Dr Besigye is moving away from the substance to form, because if you look at the way he is lining up cabinet, you see a substance of that because if you look at what he had attempted to do, having kept quiet for some time we would expect that Dr Besigye would announce a major policy decision or a major policy announcement. Say as FDC we are going to do the following things which are different from what NRM is doing.

“But they have not done that! after keeping quiet for some timehe wakes up and announces a cabinet. I can read two or three thing s in this first of all Dr Besigye is trying to remain relevant by lining up people around him, but also if you look at it critically I thing he is reading that some of the people he is lining up for cabinet are probably likely to move away from him to other political alignment. And therefore one of the ways he’s looking at, is say if I give them more cabinet force may be they will stay with me. But thirdly if you look at it very critically again you will see that with in the FDC there might be a problem, I don’tknow but there might be a problem,” Dr Makara added.